This was the third visit by Dr. Judkins of the University of Leeds, this time talking to us about the North African Desert War in WW2, and the vital role played by intercepted communications.    ‘’The Enemy is Listening Too’’ was a mantra espoused by both warring parties. So the Germans had the enigma … Read more

Nick, a curator at Kelham Island Museum for the Hawley  Collection, previously spoke to us in 2019, on Cutlery. This time his talk was on Walker and Hall, who came to be, arguably, the biggest and best cutlery and silver plate manufacturing firm in the world, at its peak.    Their specialty was electroplating … Read more

David, a retired Nephrologist, Volunteer National Park Ranger, and Covid Vaccinator, is also Co-Clerk to the Ecumenical Accompaniment Programme in Palestine and Israel (EAPPI). This organisation was founded in 2002 by the World Council of Churches based in Geneva, in response to the Heads of Churches in Jerusalem. It brings people from around the world … Read more

This was the third visit (1st on Zoom) by Prof. Ian Rotherham of Sheffield Hallam University, who is an author, broadcaster and campaigner on environmental issues.

With the prospect of the planting of the Great Northern Forest, between Liverpool and Hull, extending down into South Yorkshire, todays talk was very topical.

To begin with, some definitions:-

Forest – a landscape with a high density of trees.

Woodland or woods – a low density forest, which arose naturally, but then was managed, and may include clearings, shrubs, shade, and grassy areas.

Ancient Woodland – Woodland that has existed at least since the 1600s.

Coppice – Trees cut down to ground level so that they regenerate and ‘’spring’’ into regrowth. Hence in Sheffield, ‘’Ladies Spring Wood ‘’, ‘’New Field Spring Wood’’ and ‘’Parkwood Springs’’ where the coppicing was used to make charcoal into the 1880s.

Pollard – Trees cut down for shaping or regeneration, at a point above where an animal can get at it.

Shredding – harvesting of firewood and animal fodder,while preserving a tall main trunk which may be harvested for timber at a later date.

Herbage – leaves from when pollarding or coppicing takes place. Preferred by cows, rather than grass.

Standards – Trees grown in the open with no management.

In 1992, there was a National Woodlands Conference instigated by the Peak National Park, between Ecologists, Foresters and Archaeologists to discuss the history, and to co-ordinate future protection, of our ancient woodlands. The proceedings were recorded as ‘’Ancient Woodlands – Their Archaeology and Ecology’’. Inspiration was drawn from publications by Prof. Oliver Rackham, our own Prof. Mel Jones. Also, from a 1600s publication by John Evelyn entitled ‘’SYLVA’’, which told how wood was processed, and a Welshman Thomas Pennant, in 1772, who wrote about how trees and local resources are used throughout the country. 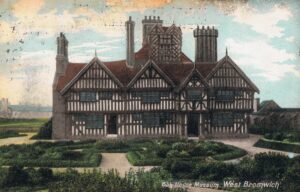 If we were to go back to medieval times we would find a very different landscape. Peoples lives were dominated by the natural materials around them, and woodlands were vital resources and busy places, where animals foraged, people lived, and there were even paved tracks for packhorses. The peoples names reflected the trades and crafts that fed their lifestyle – Carter, Cartwright, Wood, Underwood, Croft, Fletcher, Warren etc. 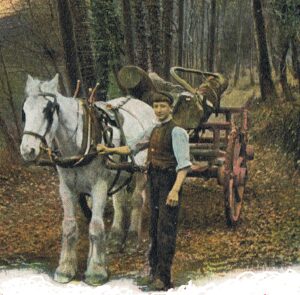 There were charcoal makers, besom makers, bow and arrow makers, wheelwrights etc, and all the buildings were built using locally sourced materials. 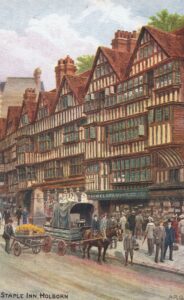 Styles of construction around the country depended on the type of timber available. Uplands had birch but in the fens with no timber they used mud, withies, turf, and reeds. Nothing went to waste. Clay, bracken, fungi, wattle and daub, and stone were used. (Wharncliffe was the biggest supplier of Quern stones for grinding in the Roman Empire). Bark was used for tanning, which was best in spring when the sap was rising, and timber was felled in winter after leaf fall, chosen by a master craftsman. Structural timbers were felled when the tree was 50 – 150 years old. This was then box halved with cross saws in a saw pit, (hence top dog and under dog). Some large trees are thousands of years old and have been pollarded and harvested about every 15-20 years, but have to be retired eventually, due to old age. They can be cored to find out when they were last pollarded. They then develop their own ecosystems and become status symbols. In Japan bamboo is used, and in North America log cabins abound, as timber was plentiful, and the purchase was financed by potash sales.

Richard spent 26 years at Sheffield Hallam University, teaching statistics, becoming the Dean of the Faculty. Meanwhile, he spent 25 years as a Lay Magistrate in the Adult Law Courts, based in Sheffield, covering South Yorkshire and Lincolnshire. Lay Magistrates was the topic for today’s presentation. Types of Magistrate :- A Professional Magistrate, also called … Read more

Janet is a historian on Victorian costumes and underwear, and gives talks Nationally.       Besides having been a guide at Eyam Hall and Renishaw Hall for many years, she salvages second hand underwear, medical equipment, spectacles…. etc, and sends 40’ container loads to the Gambia. (To donate or help – phone … Read more