David, a retired Nephrologist, Volunteer National Park Ranger, and Covid Vaccinator, is also Co-Clerk to the Ecumenical Accompaniment Programme in Palestine and Israel (EAPPI). This organisation was founded in 2002 by the World Council of Churches based in Geneva, in response to the Heads of Churches in Jerusalem. It brings people from around the world (called Ecumenical Accompaniers) to the West Bank, to serve for 3 months as Human Rights Monitors. In the UK and Ireland, co-ordination is carried out by the Quakers.

Inspired by a talk given by Mark Steel in 2000 about the asymmetric overwhelming force being used by Israel against the Palestinians during the 2nd Intifada, and with information from the International and Israeli Human Rights Groups, David decided to get involved. He has visited Israel 3 times since 2008 and now gives talks on the background to the dispute.

There are 4 groups of people in the disputed areas :-

All areas are controlled by Israel with such asymmetric overwhelming force towards the Palestinians, that the ‘’Human Rights Watch’’ have labelled it as apartheid. The evidence for this is in the way Israel has controlled, since 1948, the Palestinian people and their land, their freedom of movement and their political involvement.

Before 1917, the original Zionists bought land in Palestine with the intention of forming a Jewish homeland, and giving every Jew around the world the opportunity to return to Israel. This is referred to as ‘Aliyah’. In 1917, with the Ottomans defeated, Palestine came under a British Mandate. 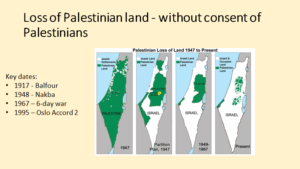 Changes to Palestinian land since 1917

In 1948 Israel declared itself an independent state, after a war against the Palestinians. The Palestinians named the day of Israeli declaration of independence Naqba Day, when half the population, around ¾ of a million, became refugees, settling in neighbouring countries, including the West Bank and East Jerusalem (both Jordanian administered) and the Gaza strip (administered by the Egyptian military).

In 1967, after the 6-day war, Israel occupied (1) the West Bank as far as the River Jordan, (2) the Gaza strip and (3) East Jerusalem. A large area of land annexed from the West Bank, was added to East Jerusalem where Israeli Law was applied, in breach of International Law.

Since 1967, eviction of Palestinian families from their properties in the West Bank and East Jerusalem has been carried out in the Israeli courts under Ottoman, British Mandate, Jordanian or Israeli Law. The odds are stacked against the Palestinians, as, if there is any doubt, the properties revert to the State. Owners are evicted and forced to demolish their own homes and are faced with large costs if the Israeli State has to do it for them.

In East Jerusalem, there are now 350,000 Palestinians who live in 28 villages, along with 209,000 Israeli Settlers. 7500 structures have been demolished since 2009, with 11500 people displaced. This is the cause of uprisings and conflict, and one of the reasons why rockets are launched from Gaza. 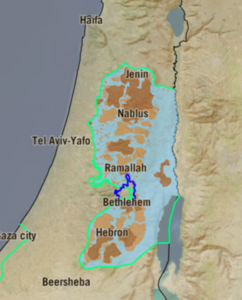 In 1995, under the Oslo Accord 2, Israel gave the Gaza strip to the Palestinian Authority. The West Bank disputed area was denoted by the Green Line, and areas designated as 1, 2, or 3 :-

At the end of the 20th century, Israel had gone from controlling 6% of the land, to 100 %. Jews have full citizens rights in all areas, whereas Palestinians rights and status differ whether they live anywhere in Israel, the West Bank, East Jerusalem or Gaza. In the Occupied Palestinian Territories of the West Bank and East Jerusalem 600,000 Jews have constructed factories, farms, Universities and cities. The farms produce dates, avocados, salad vegs. and herbs which are sometimes deceitfully labelled as ‘’Made in Israel’’ instead of ‘’Produce of the West Bank’’, which some countries, to whom they sell, insist on.

On the West Bank there 280 settlements or towns on expropriated land, with all mod. cons., and miles of settler only roads, in contrast to the Palestinians who are limited in the use of water, have their homes demolished and in area ‘C’ are prevented from any construction or development. They may have long detours through road blocks, and access to work in the Israeli Occupied parts is made difficult. The Jewish settlements are permanent, are a source of violence, and under International Law are illegal and war crimes. The Israelis  are committing gross and systematic human rights violations.

Settlers are supported by the Israeli military forces, most of whom have served in the Israeli Defence Force. They have hugely more fire power than the Palestinians and they can turn a blind eye to violence on the Palestinians, which can be extreme. This can include shootings, burning of homes, mosques and churches, attacks on crops and farmers and the poisoning of water and livestock. All this is an ongoing occurrence in Area C and East Jerusalem, and is a major concern for the UN Special Coordinator of the UN Security Council for the Middle East Process as it is all illegal under international law.

There are also about 100 ad hoc settlement outposts, again illegal under international humanitarian law and built without official authorization, but nevertheless encouraged by some Israeli government departments. These outposts control Palestinian land, and with time, become permanent. 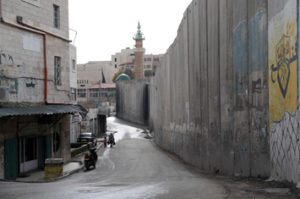 The Armistice Line around the West Bank is 320 km. long, but the illegal wall surrounding the West Bank, which is up to 8m high, meanders 700km., further dividing the West bank into strategic pockets of Palestinian areas, increasing Israeli control and the difficulties of life for the Palestinians.

The 2018 basic law of Israel, concerning land, discriminates against the 20% of Israelis who are Palestinians and are Muslim or Christian, and live in Israel. The development of 100’s of Jewish settlements is encouraged with no hint of equality accorded to this 20%, sacrificing any human rights considerations. No settlements for these Palestinians have been built and the Absentee Property Law allows for expropriation of Palestinian owned land, if not being used. The Jewish National Fund and Jewish Agency only give benefits to Jews. Bedouins are not recognised and are moved on.

The UK and Ireland train and send 20 Ecumenical Accompaniers each year, to support the Palestinians who are affected by the situation. They return to tell the world of the asymmetric force being used by Israel against the defenceless Palestinians. And the stories are harrowing. Shootings, violence, injuries, restrictions of movement, humiliation, discrimination, loss and deprivation of opportunities for work, education and medical care, which requires a permit to access services in Israel. The Palestinians are ruled under military law whereas the Israelis are under civil law. Any resistance by the Palestinians is met with differentially harsh punishment. There is particular concern for the children who can be treated extremely harshly and in breach of UNCRC or the Geneva Conventions.

Palestinians require a permit to travel between the West Bank, Israel, Gaza and East Jerusalem. They also can be subjected to unannounced road blocks. In contrast, Jews have freedom of movement within Israel and most of the West Bank, except area A and Gaza. International travel is easy for the Jews, but Tel Aviv airport is closed to Palestinians, who have to fly from Jordan or Egypt, once they have got through the Israeli checkpoints at the borders.

The presence of the EAPPI has helped to make things better, highlighting the injustice and giving some comfort to the Palestinians.

Free speech has been curtailed with 2 new laws. Introduced by Israel they constrain Jews or Palestinians from advocating the cause of the Palestinians. (1) The Naqba Law which prevents anyone from mourning the Naqba Day. This was traditionally done by Palestinians. (2) The boycott law which could impose punishment on anyone who calls for a boycott of Israel. And in the West Bank there are restrictions on demonstrations, associations and political statements, all enforced by the military courts.

The Jewish Declaration on anti-semitism is defined as ‘’Discrimination, prejudice, hostility or violence against Jews as Jews (or Jewish institutions as Jewish)’’. Where this relates to Israel and Palestine can be seen on https://jerusalemdeclaration.org/ which gives examples which are anti-semitic, and some which are not.

This was a fascinating first hand insight into what is happening between the Israelis and Palestinians today, and was very well illustrated. Although it is a very complex situation, David, is obviously passionate about the subject, and portrayed a troublesome scenario where we can all help, by advocating change.

Should you wish to seek further information, the following websites were referred to in the presentation :-