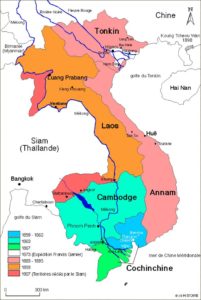 Our speaker this week, Antony Taylor, is Professor of Modern History at Sheffield Hallam University.  He had previously visited us in January 2019, when he gave a most even-handed view of Brexit and its ramifications.  He was to repeat this approach in tackling todays talk, the subject of which in its day was, for nearly twenty years – along with Nuclear disarmament – perhaps the most controversial and divisive topic of our younger years .

Tony began his talk by sketching out the background to this long and cruel conflict (1955-1975) which was to cost 58,000 American lives. The War sprung from its routes in WW2, as the US abandoned isolation and became a Pacific orientated power in the aftermath of Pearl Harbour. European colonial weakness, both in battle and supply logistics, was demonstrated by the initial success of Japan before and during the early stages of the War.  Korea, large swathes of China, Indo–China and later, Hong Kong and Singapore were over run. In the vacuum following the fall of Japan in 1945, Communism became ascendant in the now restored colonies of Great Britain, Holland and France.  All were to experience ‘guerrilla’ activity in support of independence. The US, already heavily committed to ‘roll back’ communism in the shorter Korean conflict (1950-53), attempted to ‘prop up’ the colonial powers, especially France, via ‘Marshall Aid’ funds.  This served only to stoke up the nationalists of the region, especially the Vietminh, who also operated throughout the rest of French Indo-China. Their weapons included light armoury supplied from both Russia and China, lightening terror attacks and indoctrination of the population.  No mercy was shown to any captured enemy.  The regular display of mutilated French soldiers had a grim message both in the jungle and in Paris. 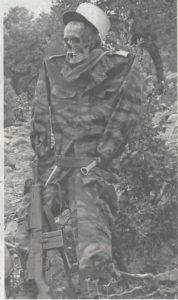 There followed a nine year war of attrition between the Vietminh and the restored French Empire, culminating in the fall of Dien Bien Phu in 1954.  This was to give independence to the former colonies of Laos and Cambodia.  Vietnam was partitioned along the 17th parallel between a Communist north under Ho Chi Minh and a US backed south under Ngo Diem.  The border was to prove unstable with constant incursions and in 1964 the Gulf of Tonkin incident -another Pearl Harbour moment- in which US ships were attacked, provoked full American involvement.  Despite a vast build-up of US forces and hardware, America was unable to prevent the Vietcong entering the south with impunity.  There was a major refugee ‘boat people’ crisis in 1978, as people tried to flee the country.  Secretary State for Defence Robert McNamara acknowledged before his death that “the USA could never have won this war”.

South East Asia was to become the ’cockpit’ of the Cold War with no ‘Yalta’ mechanism for keeping the peace. The Vietnam war was to be endlessly fought on other fronts such as Afghanistan and Iraq, blighting the records of Presidents Kennedy, George W. Bush and Bill Clinton. With TV coverage, the War attracted a great deal of mainly left wing sympathy in the West with the Viet Cong flag (a yellow star on red background) a regular sight on university campuses and demonstrations in Trafalgar Square or outside the White House.  It was to enter deep into popular conscience, becoming the subject of several films such as “Platoon”, “Hamburger Hill”, as well as plays including “ Miss Saigon” and numerous books eg,  Michel Herr’s ‘Despatches’.  The communist side made much use of propaganda pitting the underdog against the bully. 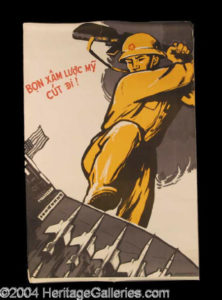 Tony moved on to discuss a range of factors, which he considered made the War unwinnable for America.  These included: 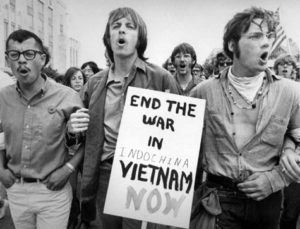 Our speaker concluded his talk by considering the consequences of the Vietnam War.   While the British had won their war against the communists by 1950, with the help of the indigenous population, and then granting (what became) Malaysia full independence in 1957, Tony thought the whole episode had humiliated the USA encouraging a return to an isolationist stance.  A more constructive approach might have been to have offered an aid package to encourage better US sentiment through greater prosperity.  By destabilising the region war, broke out between Vietnam and Cambodia, resulting in the rise of the Khmer rouge under Pol Pot. The US thus caused what it had tried to prevent -the proliferation of Communism in the region and an example for anti-colonial movements elsewhere.

Before our ‘Zoom Time’ was up Tony took a number of questions which ranged from the role of Harold Wilson (who kept GB out) the War’s impact on France and Algeria, the use of Napalm, to the Soviet experience in Afghanistan.   This level of interest was stimulated by another compelling talk for which our speaker was warmly thanked.