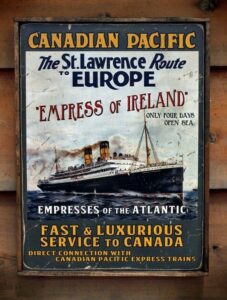 The Empress of Ireland, an ocean going 14,500-ton liner, was launched in 1906 to operate the trans – Atlantic route between Liverpool and Quebec. She was a licensed mail ship and mainly carried immigrants from Great Britain (including Ireland), Scandinavia and Russia looking for a better life in Canada. Her capacity was 1,536 passengers and following the Titanic disaster her lifeboats were increased to accommodate 1,965.

The captain of the ship, Henry Kendall had an interesting claim to fame. In 1910 he was commanding the ship SS Montrose, and recognised a certain Dr Crippen, who was wanted for the murder of his wife, onboard. After alerting the authorities, Crippen was arrested at Quebec. Crippen allegedly told Kendall “You will suffer for this treachery” and this became known as the Crippen curse. 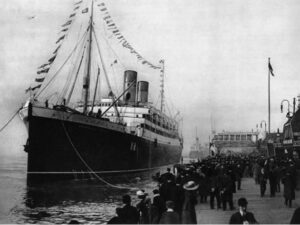 On the 28th May 1914 the Empress set sail from Quebec at 16:30 local time with a compliment of 420 crew and just over one thousand passengers. Eighty seven people were in first class, about one quarter full, with two hundred and fifty three in second class of which one hundred and sixty seven were members of the Canadian Salvation Army band.

Barbara Beard, our speaker, has a particular interest in the Salvation Army as her father was a Salvation Army bandmaster for many years, and her grandparents and great grandparents were also prominent members. In third class or steerage were seven hundred and sixty four passengers – almost full capacity. Many of these were returning immigrants who had decided Canadian life wasn’t for them. 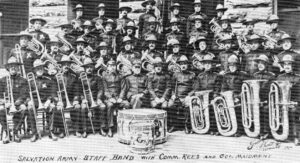 It was a warm evening as the ship slipped her moorings and made her way up the St Lawrence seaway. There was much excitement on board as passengers found their way around the ship and many had opened portholes to let in fresh air.

At 1.38 am on the 29th May the SS Storstad, a fully loaded Norwegian collier, was sighted about eight miles away. Captain Kendall decided to pass this ship starboard to starboard not the usual method of navigation. On board the Storstad the first mate decided to pass port to port in the absence of captain Anderson who had retired to his cabin.

Fog now enveloped the two ships. Captain Anderson signalled to stop the engines and captain Kendall ordered their engines to be reversed. Too late the Storstad hit the Empress of Ireland midships causing a huge hole on the starboard side. Sea water poured into the lower decks. Captain Kendall signalled to the Storstad to start her engines to plug the gap but to no avail.

In six minutes, the power failed and all lights extinguished. In ten minutes, the ship turned over onto its starboard side as water entered through the open portholes. Only five lifeboats were able to be launched because of the ship’s list. Most of the passengers and crew on the lower decks drowned very quickly. Captain Kendall was thrown from the bridge into the water but managed to reach a lifeboat and survived. In fourteen minutes, the ship had sunk. 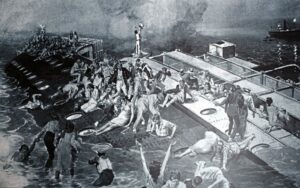 The Storstad launched her lifeboats and was able to save several passengers. The pilot boat Eureka and mail ship Lady Evelyn also rescued survivors from the water and from the Storstad.

In all four hundred and sixty five were saved and one thousand and twelve perished. Many passengers drowned asleep in their cabins. Of one hundred and thirty eight children on board only four survived. Only seven members of the Salvation Army band were saved.

The enquiry into the disaster held in June 1914 found that the Storstad was to blame for the collision by altering her course in the fog. This was rejected by the Norwegians who blamed Kendall for not adhering to the rules of navigation. No definitive conclusion has ever been established.

The Canadian Pacific Steamships Company ordered a salvage operation shortly after the disaster to recover mail bags and silver bars to the equivalent value of one million dollars. Bodies were however left on the wreck. This tragedy was then largely forgotten due to the start of World War 1, but the families of those who died or survived have always wanted the sinking to be more widely known.

Barbara presented a most interesting and informative talk and we are very grateful to her for filling in at short notice.