Pat Heslop-Harrison is Professor of Genetics at the University of Leicester, an institution famous for its impact on medical and biological science through such world leading research as the Human Geno project and the DNA structures of animal and plant life.  Perhaps less well known is the research going on into the applications of such science into  areas such as agriculture and food sustainability, as we face up to climate change.  Our speaker could have ensured our interest by choosing to focus on any one of a number of staple crops: wheat, maize, rice, potatoes, lentils, soya etc.  But it was to be the humble banana which was to be his choice of main dish on the menu.

Professor Harrison opened his talk by explaining the importance of the banana as a leading dietary staple and contributor to world food supply.  Around 120 million tons are now produced world-wide, with cultivation mainly in tropical and frost-free countries. But only around 15% of production enters world markets.  India and China are the largest producers, all consumed domestically.  Elsewhere, the main producers are Latin America and the Caribbean Islands, exporting to North America and Europe.  These markets opened up in the late 19th Century with improvement to shipping, storage for controlled ripening and onward logistics, the trade becoming dominated by the likes of Fyffes, Pratts, Dole and Chiquita, who have about 60% of the market. 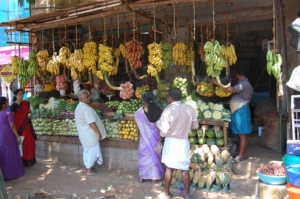 Bananas are a valuable source of Potassium, fibre and vitamins B and C.   According to the Guinness Book of Records, they are now the most consumed fruit – not only by athletes wanting an energy boost from their high carbohydrate and sugar content!  Although a fleshy elongated fruit -the banana is botanically a berry produced by herbaceous plants (not trees) in the genius Musa.  Originating in SE Asia, they come in all sorts of shapes and sizes (and fruit colours) and can grow up to 16 feet.  Cultivation began around 6000 BC when the original wild fruit had large black seeds and so was difficult to eat.  Seedless varieties have been evolved over the centuries.  In the Tropics, smaller, firmer, bananas used for cooking are called plantains. The familiar yellow dessert fruit we enjoy are typically from the Musa Acuminata ‘Cavendish’ variety. This became popular in the 1950s when the Gros Michel variety became unviable due to Panama Disease.  These typically arrive in our shops via refrigerated (13.5 %C) sea containers with the on shore artificial ripening process controlled by ethylene gas.  This enables demand and supply to be carefully controlled, and waste minimised, before distribution to retailers.

Our speaker, who shares research with universities in China and France, moved on to give us a taste of the science behind the cultivation of the valuable crop.  There are over 2000 known varieties of banana. These have been studied and recorded by their (millions )  of cell, gene and chromosome structures to give ‘banding’ patterns.  (A similar approach is used in vaccine research).  This allows scientists to establish which variety is related to what and facilitates the identification of nutritional value, disease/virus/insect resistance and climate hardiness. What followed was much above your blog writer’s head, but sensing that we might be enlightened by the delights of CZH2 proteins and single Nucleo Polymorhisms, Pat suggested we might refer to the Banana Genome Hub on the web. (it’s worth a look! 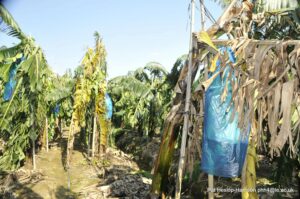 Professor Harrison concluded his presentation with a glimpse into the future. Food sustainability and reliability will continue to be major concerns.  We are all aware of the effects of population growth, economic expansion and, increasingly climate change: much of the world seems aflame, or suffering from extreme storms and flooding. These events are clearly already having an effect on agriculture -animal and plant- and water supplies and levels.  And there are other threats: the popular ‘Cavendish’ variety is becoming affected by the Sigtoka virus and much research into hybridisation and genetic engineering will be required to combat it. The same threats apply to other crops and give rise to other challenges such as fungi, bacteria and weed reduction.  Major programmes already under way have allowed food reduction to keep pace with population growth but sadly there has been political resistance to these developments, not least in Europe.

As might be expected, Pat’s talk stimulated more questions than time allowed.  These included:  Was the Potassium content in bananas harmful? (No)  Why was the Cavendish variety so popular? (Reliability in cultivation, ease of transport –but try others available in ethnic shops)  What might be the effects of climate change? (Could extend or reduce areas of production). Do bananas help ripen tomatoes (yes, they give off ethylene gas).  And what is the correct way to peel a banana? (From the flower end towards the stalk).