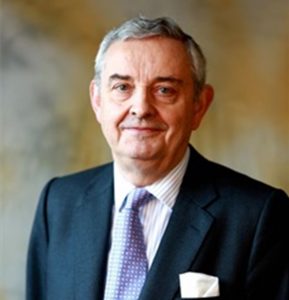 Probus this week enjoyed an entertaining and informative talk by the Lord – Lieutenant of South Yorkshire former solicitor and accountant Andrew Coombe. He was born in Sheffield into the Spear and Jackson family went to Wellington School following which he bypassed university and trained as an accountant at Cooper Brothers (now PWC ) in Sheffield. After an invitation joined Keeble Hawsons and retrained as a solicitor specialising in the corporate law arena.

Following retirement in addition to his extensive charitable works, he stood as  High Sheriff ofSouth Yorkshire in 2011 – 2012. After this prestigious role, he was looking forward to having more time for his family and hobbies. However, in early 2015 he received, from Downing Street, a letter inviting him to apply for the post of Lord – Lieutenant  and was inducted into role in April 2015 for a term until his retirement from the post on the date of his 75th birthday, at the time of his visit this left 30 months remaining.

Whilst the position dates back to the 1500’s he informed us that the role was and remains little understood and one of his aspirations is to get greater understanding across the whole of the South Yorkshire region. Andrew did not go into the post entirely blind, so to speak, as he had stood as a Deputy for 20 years prior to his induction.

We were told that the Lord – Lieutenant stands as a representative of the Queen and wider Royal family and is unpaid and non-political. Whilst unpaid there is an element of repayment of expenses, however,  the incumbent has to provide elements of the positions formal attire this being as a Major General incorporating a ceremonial sword, hand made in Sheffield, sashes, and medals. 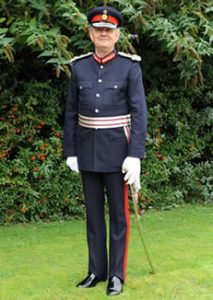 The role requires considerable commitment with the Lieutenant attending 400-500 events in any one year although some but by no means the majority being undertaken by the Deputy Lieutenants of which there are some 40 at the present time with some 35% being women and coming from across a wide range of ethnicities.

The Lieutenant is also supported by an office in Barnsley where his PA sits with others and runs his diary and assists with the organisation of royal visits four of which have already been completed this year. In addition, the post holder has responsibility for awarding honours and Royal Awards for both Citizenship and Enterprise and hopes to raise the profile of  South Yorkshire within the wider business community.

Mr Coombe is also keen that throughout his tenure community cohesion can be improved this being done via meetings with local groups across the social spectrum promoting contacts and creating an environment for cross-culture contacts and understanding of different social mores. He is also involved in visits to schools across the region explaining his role and also has an interest in Cadet and Scout groups and the benefit the membership can have on individual members some of whom have difficult social and economic backgrounds. 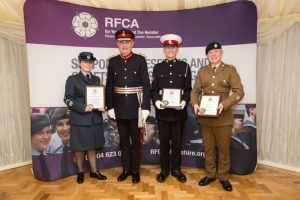 Mr Coombe has obviously thrown himself into what is a demanding but rewarding position with a vigour that I suspect not many of us share and is I believe a great ambassador for the region and the post of Lord- Lieutenant about which we are all now much better informed.

Another excellent and enlightening talk.