Energy consumption is ever increasing to keep up with the demands of a growing population. Many believe the increased demand could be met by the extraction of shale gas through the process of fracking which is a technique to recover gas and oil from shale rock. Drilling companies have estimated that trillions of cubic feet of shale gas lay beneath us awaiting extraction.  However, there is a great deal of public hostility towards the process of fracking and protests have delayed progress on many drilling sights. Clearly we need more gas to meet our growing requirements and currently we must import supplies from USA , Norway, Middle East and others.

Shale is a simple clay based rock containing molecules of gas and oil. A short video clip was played illustrating how easily a piece of shale rock could be set on fire to show its burning qualities. To release the gas and oil molecules , the process of fracking is used which involves drilling vertically into the earth to the strata of shale rock and then gradually changing the direction of the drill to bore horizontally.  A mixture of water, sand and chemicals is directed under high pressure into the rock . The pressure opens up fissures in the rock which are held open by the sand.  The process is reversed and water now dirty flows to the surface followed by oil and gas which are separated and transported away. The recovery of the gas takes place over a lengthy period. 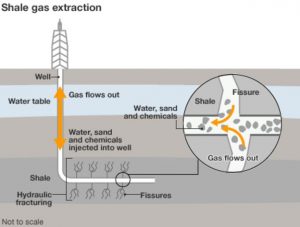 Reserves of shale gas have been identified in large swathes of the UK particularly in northern England. More than 100 licences have been awarded by the government allowing firms to explore for gas and oil.  Planning permission must be received from the relevant local council before production can proceed.. Here is where the disputes arise with organised protest. The company Cuadrilla was granted a licence to drill and extract gas and oil near Blackpool but were forced to suspend production after earthquakes of 1.5 and 2.2 magnitude  on the Richter scale hit the area. It was deemed “ highly probable “ that the tremors were caused by the fracking.  Using the government’s “ traffic light system “ for fracking , pumping has to proceed at a reduced rate after tremors are experienced below 0.5 and stop for 18 hours after a tremor of 0.5 or over.

The risks of earthquakes , noise and water pollution are major concerns to the public and this fear has escalated into mass protest, hampering and stopping the progress of  drilling and extraction of shale gas.. However, the problem remains – as the population increases the demand for gas grows. Over 80% of the UK has access to gas and over 45% of electricity is generated by using gas.. The irony is that the very people who are protesting are most likely users of gas.  However, the threat to the environment is real and cannot be under estimated , particularly when using a process and technology which are largely new and untried in this country. The shale gas industry may be struggling in the UK but in the USA it is booming and a net exporter.  There the process is long established originating in Oklahoma in 1949 and a further major advantage is that the drilling and production occurs in vast open spaces away from the populace. A luxury we do not have.

These are interesting times.   The population is growing – we need more energy.  Roger gave us a most interesting talk giving us the facts and confronting the myths which surround fracking.