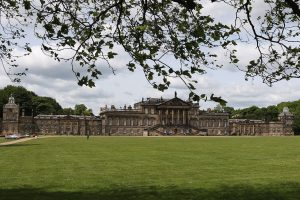 Most of our members had read Catherine Bailey’s fascinating book Black Diamonds, the Rise and Fall of an English Dynasty, which maps the history of coal mining in South Yorkshire and the downfall of the Fitzwilliam family.

It was our first outside visit of the year and one of the most popular ever, with a party of 52 members and their partners arriving in glorious sunshine on the spring equinox for what turned out to be a 90-minute tour of just some of the more important formal rooms in two separate groups. 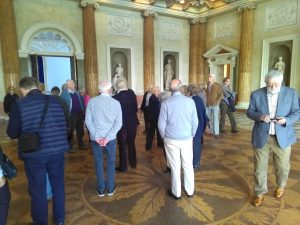 The Georgian masterpiece of Wentworth Woodhouse, largely hidden from public view on the edge of the village of Wentworth, boasts an east front wider than that of Buckingham Palace and in its heyday provided employment for 1,000 local people maintaining its reputed 365 rooms and surrounding estate.

The Grade I listed country house was bought for the relatively knockdown price of £7 million by the Trust, which aims to restore it to its former glory at a cost of up to £200 million, with assistance from the National Trust who are currently paying the wages of the full-time staff. Scaffolding alone, which shrouded much of the famous façade on the day of our visit, is costing £1 million.

The house has 250,000 square feet of floor space and covers an area of more than two and a half acres, surrounded by 180 acres of parkland and an estate of 15,000 acres.

The original Jacobean house was rebuilt by Thomas Watson-Wentworth, the first Marquess of Rockingham (1693-1750), and vastly expanded by his son, the second marquess, who was twice Prime Minister. In the 18th century, the house was inherited by the Earls Fitzwilliam who owned it until 1979 when it passed to the heirs of the eighth and tenth earls, its value having being boosted by the vast quantities of coal discovered on the estate. 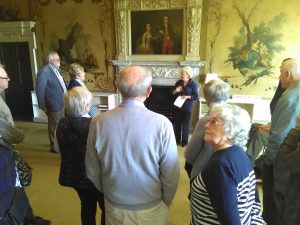 However, this turned out to be a double edged sword. Following nationalisation of the coal industry on New Year’s Day 1947, Manny Shinwell, the Minister of Fuel and Power in the Labour government, ordered that the formal parkland in front of the house be sacrificed to opencast coal mining, and the workings extended right up to the front door of the house. Controversially, Shinwell insisted that the coal be obtained ‘at all costs’ in the interest of Britain’s postwar industrial drive, despite the president of the Yorkshire Mineworkers’ Association claiming that it amounted to vandalism.

Although the grand east front of the house is the best known and the most illustrated, it was the west front finished in 1734 which was intended to be for the family’s private enjoyment rather than the impressive east front which demonstrated their social and political ambitions. 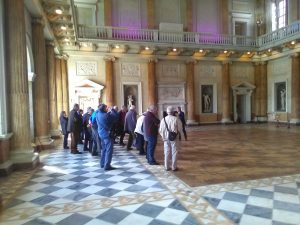 Wentworth Woodhouse actually comprises two joined houses. The west front, with the gardens facing north west towards the village, was built of brick with stone detail. The grander east front is said to have been built as a result of rivalry between two branches of the family. The Stainborough branch of the Wentworth family inherited the Earl of Strafford’s minor title of Baron Raby but not his estates, which went to Thomas Watson (who added Wentworth to his surname). The Stainborough Wentworths, for whom the Strafford earldom was revived, lived at nearby Wentworth Castle. 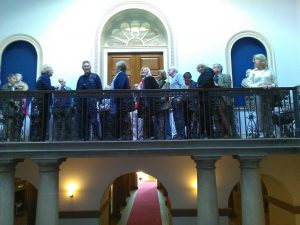 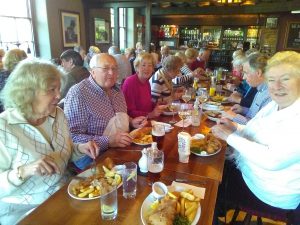 We rounded off our morning visit with lunch at either the Rockingham Arms or George & Dragon pubs in Wentworth village.