Our Speaker this week worked as a Biomedical Scientist for the NHS.  One of his many interests before and since retirement has been the restoration of the Chesterfield Canal.  He is currently Vice Chairman of that waterway’s restoration society, the Chesterfield Canal Trust.  We had previously enjoyed two talks on this fascinating topic from other speakers and Michael’s talk was to make that a happy treble as he explored an important aspect of our local Economic History. 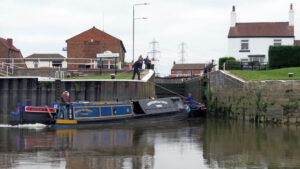 With illustrations throughout, our Speaker was to take us on a ‘before and after’ trip -both virtual and historical- along the near 46 miles of the canal.  We started at the canal’s junction with the River Trent and its entrance at West Stockwith tidal Lock, and finished with a glimpse of Chesterfield’s famous twisted spire viewed from a spot which is now becoming the ‘Waterside’ development off the A61.

Michael opened his talk with a resume of the difficulties faced by the canal’s construction. The landscape is fairly flat east of Worksop: thereafter the topography no longer permitted following contours. There is a rise westwards to over 240 feet above river (Trent) level reaching a summit at a point where the course runs under the M1 motorway.  A 74ft drop towards Staveley follows with a final 40ft rise before Chesterfield.  All this required the construction of no less than 65 locks, two aqueducts, several ‘feeder’ reservoirs, a minor tunnel at Drakeholes and the major 2284 yard effort at Norwood. There were also other tunnels which linked directly with coal workings.  Norwood was the scene of a major collapse in 1907 due to mining subsidence, effectively cutting the canal in two, isolating Chesterfield and thus losing much trade. 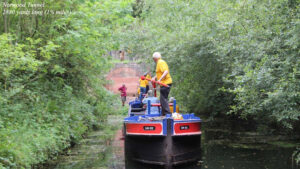 The Chesterfield Canal was constructed between 1771 and 1777 at the height of the Industrial Revolution, with its rapidly increasing use of steam power. These two developments, together with numerous technical and mechanical innovations, resulted in a growing and  insatiable appetite for coal, Iron and other heavy raw materials.  Likewise, the carriage of finished products to home and export markets was being hampered by the transport logistics of the day: access to main artery of the North Midlands, the Trent, was limited to horse and cart or subject to the whims of the Idle and other small rivers.  Under the Leadership of the Duke of Newcastle and several other large landlords, who owned mineral rights – and with the support of local towns along the proposed route- “The Company of Proprietors of the Canal Navigation from Chesterfield to the River Trent” was incorporated in 1771.  The share capital raised was £100,000.  The Company appointed James Brindley as its Chief Engineer.  Originally the plan had been for ‘narrow boats’ (requiring 7ft locks) only, but nine shareholders funded the extra cost of installing ’broad locks’ (14ft) as far as Retford.  Apart from allowing a far cheaper delivery of coal (which halved in price), the canal was  also to  build up a thriving trade a wide range of cargoes including iron, lead, sand, cement, gravel, bricks, timber and later, ‘wark’  (a kind of mud used in the cutlery and other trades).  And it was carry stone from the South Anston quarries to the Trent (and hence to London via the coast and Thames) which was used to construct the then new Houses of Parliament we know today. The business traded profitably up to around 1845, at one point paying a dividend of 7%!

Before the Norwood tunnel collapse, the main turning point in the canal’s fortunes was the advent of what became the Manchester, Sheffield and Lincoln Railway (from 1890 the Great Central), which effectively took the business over in 1845.  The MSL did not, however, use part of the Canal as a track-bed as originally proposed. It was to remain in railway operation and ownership (LNER from 1923) up to nationalisation in 1948 thence becoming the responsibility of British Waterways.  By that point, rapidly developing and more flexible road transport was to take over the vast majority of freight traffic, leading to formal closure in 1960.  Under the Transport Act of 1968, the eastern Worksop-Stockwith section (which remained in water but in parts clogged by weed), was designated for leisure use, but this was only after much campaigning, led by the Worksop and Retford Boat Club.  Sadly, the section west of Norwood was to be sold off in parts for development.  Years of neglect were to follow together with some destruction of locks etc and the construction of new over bridges with insufficient headroom to allow a boat or horse to pass. 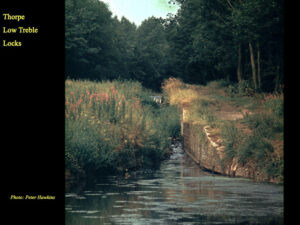 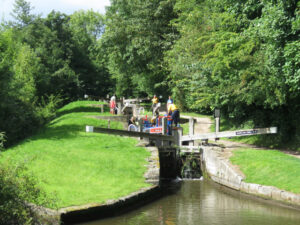 “Transformation: Turnerwood locks before and after restoration in 2002”

Michael Edwards then went on to outline how the Canal Society came into being in 1978 (It became the Chesterfield Canal Trust in 1998) to spearhead restoration. The Trust initially sought to extend the section beyond Worksop, but when progress was slow, moved to working on the Chesterfield end.  Over five miles of canal, including five original locks and a brand new lock at Staverley Basin were navigable by 2017.  The eastern end was restored from Worksop to the mouth of Norwood Tunnel at Kiverton Park between 1995 and 2003, funded by Derelict Land Grants, English Partnerships and the Heritage Lottery Fund.  Three new marinas have been constructed.  Old buildings have been restored and several traditional ‘hump-backed’ over bridges have been rebuilt to replace the more recent ‘’flat’ intrusions. The canal now boasts a new scratch built ‘Cuckoo Boat’ the ‘Dawn Rose’ not mention the tow–horse “Charlie”.  There are 4 ‘trip’ boats. 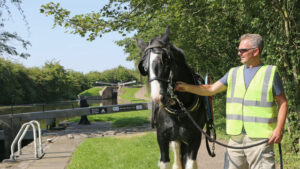 “Charlie” with his keeper Dean

Less than nine miles of the original route towards Chesterfield remain to be restored to link the two navigable sections but this will require some new lengths of the canal to be built to bypass the housing development at Killamarsh.  While the western end is still in good condition, there will be a need to replace most of Norwood Tunnel  which cannot be restored.  Michael explained some of the options which might bring this about. 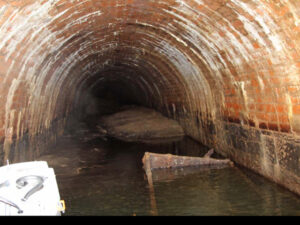 The Eastern section here is managed by the Canal and River Trust and the western end by Derbyshire County Council, including the visitor centre at Tapton. The Trust’s centre is located at Hollingwood.  It’s worth a visit to see the amazing developments and regeneration around with more work to come.

Michael concluded his talk by looking ahead to the future. In the longer term there are proposals to make a link with the Sheffield  Canal via the Rother Valley Country Park.  In the shorter term, while the Chatsworth Estate had been very supportive, any further significant progress around the Burrow Hill/Trebor/Staverley Irons works site is currently unclear. This is due to current funding constraints, and decisions over the route and maintenance depot for the HST2 Birmingham Leeds section.  Funding is also a problem at the waterway’s Terminus, the ‘Waterside’ marina development in Chesterfield, which may have to be scaled down.  But few projects of the size of restoring 46 miles of canal go without problems and set-backs.  The Trust has raised nearly £200k in donations and £20m in public funds. It now has 2000 members- new members always welcome!  The Trust has recently appointed its first paid manager, George Roberts, ex Cromford Canal.

While much remains to be done, there has been immense satisfaction in restoring a derelict ditch into an attractive public amenity.  The canal now attracts not only nature watchers and fisherman but cyclists and walkers (0ver 1000 a week at the latest count). We would be very welcome to join them and thought will be given to a canal walk followed by a pub lunch when Covid permits. 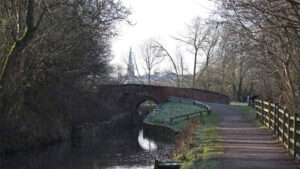 The Spire in the distance.

Our talk –via Zoom- was appreciated by a record audience of 54, including one member in California and three guests.