Roger kicked off S10’s Probus 2021 with a fascinating talk about the development of The Brent  Oil field by a UK/Dutch joint venture comprising of Shell UK and Exxon Mobile. Roger qualified as a mechanical engineer and joined Shell in 1972 and after an apprenticeship in Holland went on to work on oil rigs around the world including in the North Sea.

Roger commenced his talk by showing a video of an oil platform experiencing a severe storm and illustrating that what we all might have thought as a solid structure actually was affected by the wave patterns pitching not only up and down but also rotating revealing what a complex process it is to drill in such a hostile environment. 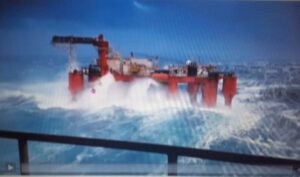 The UK sector of the North Sea following the discovery of recoverable oil and gas reserves was divided into quadrants and blocks which were then put up for tender achieving at that time in 1964 prices of between £1million and £2million pounds. Oil  deposits were to be found in the middle to north of the sea with gas fields to the south, nearer to Holland and Norway. The first UK rig to be built was in 1964 but unfortunately this was positioned in an area of the North Sea that was unproductive and did not produce any oil. A costly experience though later in his talk Roger did tell us that only one in three wells drilled would produce sufficient oil to be economically viable.

Roger then explained the various types of platforms which were developed over time as the industry got gained experience and expertise in construction methods. Initially rigs were Jack Up  designs and or semi-submersible however it seems that many of the early designs had bad ends with the sinking of Sea Gem built in 1965 and Sea Quest operated by BP in the Forties Field  this going down off the African coast after being sold off. The design of the early rigs had the drill head placed on the edge of the platform however this proved to be unstable and later models had the drill head in the centre of the deck with the whole platform being stabilised via ballast tanks in the “legs”. Building of the early rigs was undertaken in the North East and in Scotland however  the first platforms had to be towed across the Atlantic until construction facilities were completed in the UK. 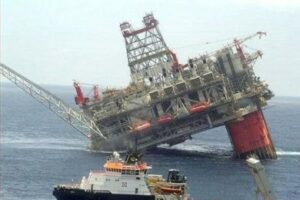 Shell’s first oil field was initially named Field A UK however this was soon changed to Brent to reflect the name of the geological formation in the region but also Shell chose names of water birds for this and other fields where they operated.

Having been posted to Aberdeen in 1973 Roger worked on the Brent field for some time with travel out to the rigs being by helicopter dressed in those days in ordinary clothes  i.e. with no   survival suits though the helicopters had been adapted for long range flight it being some 150 miles from base to the rigs, the fuel capacity was lifted to give a range of 500 miles and additional adaptations were made to allow ditching in the sea in the event of an emergency.

Early trips had to be navigated without the benefit of GPS and pilots used a radio triangulation system  before a series of marker bouys were laid to improve accuracy GPS not being available until the 1980’s.

Before oil extraction could start it was necessary to undertake core testing to ascertain likely production levels. These cores could be as much as 450 feet in length and were generally clay and in the case of the Brent Field often dripping with oil. The field itself was approximately 25 miles long and 4 miles wide with the four rigs located equidistant down the centre line of the field able to drill down two miles vertically and one mile sideways. 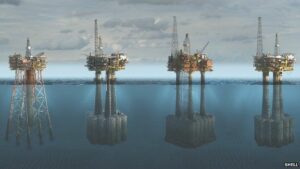 As time passed construction of many of the rigs moved over to the use of concrete these being built from the ground up at deep water locations such as Nigg Bay with the lower sections poured in dry docks then  floated out to deep water for completion. These rigs weighed some 300,000 tons and are significantly higher when completed than the Eiffel Tower the working platforms being built to ensure that they would not be inundated by a 100 year event storm wave. 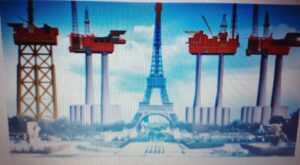 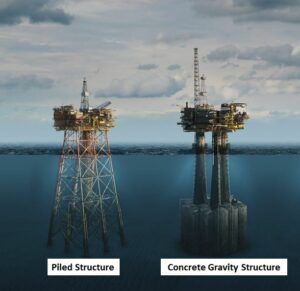 Once oil production started the oil was stored in ballasted/floating tanks some 93m long and then transferred to tankers for distribution/refining one such example was the well known Brent Spar which you may recall was occupied by Greenpeace prior to being broken up the original plan being to leave it in situ. Pipelines eventually superseded this methods with gas lines being laid in 1978 and oil pipe lines in 1982. 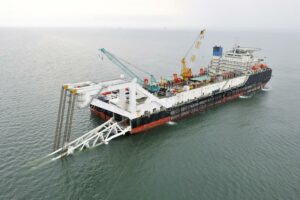 Oil was taken from the Brent Field from 1976 until 2010 with production peaking in 1985. During the course of its life the price of crude oil fluctuated from $10 a barrel in the 1970’s to $147 a barrel in 2007. In 1985 revenue from the North Sea peaked at £20 billion falling to £4 billion. Tax revenue from the oil and gas fields has been £20 billion a great boost to the UK’s economy. Wind down costs are estimated at £53 billion the taxpayer footing a bill of £24 billion.

Roger then showed a fascinating video showing the complexity of rig dismantling using specialist twin hull barges/ships to lift the working platforms off the concrete legs which will remain in situ over the now sealed off well heads.

A most informative and interesting talk about an industry that has bought great financial benefit to the UK and one which Roger thinks will continue on for many years until renewables can at last provide sufficient power for the future.