I should imagine that 90 per cent of the population of Sheffield have heard of the Assay Office, and are vaguely aware of its role in hallmarking items of precious metal, but few fully appreciate its significance on the national and world stage. 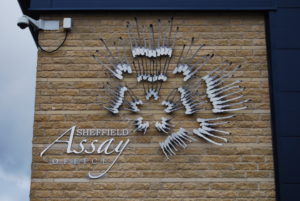 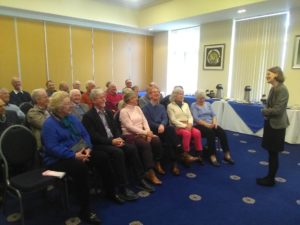 Sheffield Assay Office has been making its mark since 1773 when local silversmiths, despite opposition from the Goldsmiths’ Company of London, successfully petitioned Parliament for the right to assay silver in the city, and whilst it is not the oldest of the four similar establishments still in existence – the others are in London, Edinburgh and Birmingham – it is today the biggest and most influential.

Interestingly, despite that early opposition from the Goldsmiths’ Company, there are many London-based businesses who choose to send their precious goods to Sheffield to be assayed, and some of those clients have global reputations to uphold.

A party of 28 members and guests from Stumperlowe Probus Club enjoyed a two and a half hour visit to the Assay Office, where we were privileged to be given an introductory talk, followed by a tour of the ultra-modern premises, by Emma Paragreen, the curator, librarian and archivist.

Emma is a leading figure in the world of precious metals and jewellery. Apart from her Assay Office work, she is a committee member of the Silver Society and editor of their newsletter, and a member of the Society of Jewellery Historians and, in the last three years, has completed her Professional Jewellers’ Diploma through the National Association of Jewellers. She also recently became a Freeman of the Goldsmiths’ Company.

Michael Portillo fans will have heard of Bradshaw’s, the famous reference book of railway timetables. The similarly named equivalent for precious metals (the difference being that this one is still going strong), is the snappily titled Bradbury’s Book of Hallmarks: A Guide to Marks of Origin on English, Scottish and Irish Silver, Gold, Platinum, Palladium and on Foreign Imported Silver and Gold Plate 1544 to 2020. Daniel Bradbury was the first Sheffield Assay Master; the book is published by the Sheffield Assay Office, and Emma is the editor.

In short, we couldn’t have wished for a more knowledgeable person to bring us up to speed on the work of the Assay Office, whose senior staff were and still are known as the Guardians of the Standard of Wrought Plate in the Town of Sheffield. Even in 1773, Sheffield had an established tradition of fine silverware production, but the number of guardians who were also silversmiths was restricted in number to ten to ensure that the Assay Office offered an independent and impartial service, for the benefit of the customer rather than the manufacturer.

The hallmark, then, is the oldest form of consumer protection that exists, and the current Assay Office premises on Beulah Road at Hillsborough are known as Guardians’ Hall. But despite having almost 250 years of history behind it, the office is a hi-tech scientific establishment where hallmarks are just as likely to be applied (depending on the item being assayed) by laser technology as by the traditional hardened-steel dyes.

The traditional business of hallmarking continues to provide customers both nationally and worldwide with an assurance of quality and purity. The instantly recognisable Sheffield mark of the Yorkshire rose is carefully applied to items of precious metal which can range from the most delicate chain to a stunning one-off table centrepiece created by a contemporary designer. Whatever the item, whoever the customer, the independence and stringent standards of The Sheffield Assay Office ensure accuracy and inspire confidence.

The original aim of the introduction of hallmarking was to protect the public against fraud and the trader against unfair competition. That principle is as important in Sheffield in 2020 as it was when the first UK legislation relating to hallmarking was introduced in 1238.

You can find further reading on the history and work of the Sheffield Assay Office on their own website: www.assayoffice.co.uk