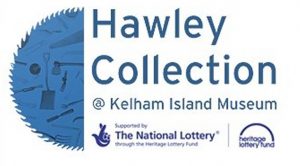 After Nick Duggan’s talk on his own cutlery collection two days earlier, the ‘made in Sheffield’ theme continued when 22 Stumperlowe Probus Club members gathered as arranged at the iconic Bessemer Converter outside Kelham Island Museum ready to start our guided tour of the Hawley Tool Collection.

As Nick, the curator, pointed out, the Hawley Collection might be one of Sheffield’s best kept secrets but it is an internationally important record of tool making, cutlery manufacture and silversmithing during the city’s industrial heyday, complemented by material from other parts of Britain and the world.

The collection houses a staggering 100,000 items, of which 40,000 are on display at any one time. The collection is housed in what was originally the Wheatman and Smith saw works, so it is appropriate that the Saw Shop, situated slightly away from the main tool collection, contains no fewer than 2,000 examples of what, 250 years ago, was literally cutting edge technology.

We learnt the origin of the words top dog and underdog. When planks were sawn by hand, with two men using a two-handed saw, the senior man took the top handle while the junior was consigned to the sawdust-strewn pit below. The irons that were used to hold the wood securely were called dogs.

At one time there were 200 firms in Sheffield manufacturing saws. The city’s cutlery heritage is represented just as impressively by a collection which contains 800 different manufacturers’ stamps on knife blades, from tableware to penknives.

The collection does not just contain tools, it contains the tools which were used to make the tools; it is unique in combining finished artefacts and ‘work in progress’ to illustrate how things were made, as well as published catalogues, archive material, pictures, photographs, tapes and films.

For over 50 years the late Ken Hawley – he died in 2014 at the age of 87 – had collected what became the basis of the collection, and during his working life, which included 30 years selling tools in his own shop, he acquired an unrivalled knowledge of Sheffield’s industrial heritage.

The building at Kelham Island housing the Hawley Gallery and storage areas was created in the last unused building on the Kelham Island Museum site following a successful bid to the Heritage Lottery Fund. The £595,000 HLF grant, awarded in 2008, was used to refurbish the building to create displays, storage and research facilities, and the Gallery opened its doors two years later.

Ken saw the collection as a tribute to the craftsmanship, skills and excellence displayed over the centuries by Sheffield firms and workpeople, and it was his wish that the collection should stay in the city to provide the people of Sheffield as well as visitors with a permanent, lasting record.

After being welcomed by Nick Duggan, we were given an overview of the Kelham Island site by volunteer guide Paul Kipling before being taken into the research area where Keith Crawshaw, chairman of the trustees, spoke to us about Ken Hawley the man, and his vision which led to the creation of the museum.