This was a detailed and fascinating talk about the history of Westminster Palace. A memorised (rather than read) delivery using the beautifully prepared slides as prompts would have been for me the icing on the cake. I particularly liked the Dennis Skinner quotes; there are a few extra ones slotted in at the end.

Thorn Island at the confluence of the Tyburn with the Thames was marshland where the Saxon St Peter’s Monastery was built, then demolished later in the 11th century by Edward the Confessor, replacing it with the larger Benedictine West Minster abbey and its adjacent palace. William the Conqueror was crowned there in 1066. William II added Westminster Hall, the largest ceremonial centre in Europe. Henry III replaced the abbey in the 13th century with today’s much altered building, adding the adjacent St Stephen’s Chapel (which had a vital role in the history and development of Parliament as we now know it), the Lesser Hall, King’s (“Painted Chamber”) and Queen’s Chambers and Queen’s chapel. This was a turbulent time in our history. Henry III attempted to regain lost Magna Carta powers from the barons, led by Simon de Montfort who called a series of Parliaments to suppress the king and establish the need for Parliament’s approval to collect taxes, thus extending Magna Carta’s powers. A Parliament of barons, the clergy together with untitled citizens and burgers met in the Queen’s Chamber. After 1341 they met separately in the forerunners of the Houses of Lords and Commons.

It was still a royal palace. In the reign of Henry VIII a fire in 1512 caused substantial damage, Henry moved to Whitehall Palace and granted Westminster to the government. The Commons then moved into St Stephen’s Chapel next to Great Hall (with its magnificent hammer beamed roof) and stayed there for the next 300 years. The prayer stalls each side of the aisle were the origins of the two-party system of government and opposition. The screen’s right and left doors became the symbolic portals for the present day “ayes” and the “no’s”.

Guy Fawkes was a Catholic convert after the reformation. At the state opening of Parliament his plan to destroy the protestant Parliament was uncovered and he was tortured before revealing this fellow conspirators. On his way to beheading Fawkes jumped from the ladder to the scaffold and broke his neck – a much better way to go?

When Charles 1 tried unsuccessfully to impose his authority, Cromwell assumed power and Charles was executed for treason and since that time no subsequent monarch has entered the House of Commons apart from state occasions.

Your blogger was astonished to hear that a mere single Prime Minister has ever been assassinated (Spencer Perceval in 1812).

In 1801, the Union with Ireland created 100 more MPs. More space was needed. James Wyatt removed the medieval furnishings in St Stephen’s Chapel. The Queen’s Chamber proved too small for the Lords after 500 years and they moved to the much grander Lesser Hall.

An unattractive hotch-potch of mediaeval timber-framed buildings was a real fire risk. Storage of huge numbers of tally sticks (ancient memory device for those who don’t remember) proved incendiary in 1834. Fire destroyed most of the palace. Only Westminster hall, the Jewel Tower and chapel under the House of Commons survived. 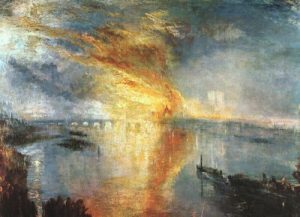 The Burning of the Houses of Parliament JMW Turner (Tate)

Britain was then the most powerful nation on earth and a new Parliament building was built in the neogothic style. Anston was chosen to quarry 35,000 tonnes of magnesium limestone quarried for its warm appearance. Half a million tons were taken along the Chesterfield canal via the Trent, Humber and Thames to London. Charles Berry enlisted Pugin’s help, whose riverside design adjacent to the old medieval buildings was part of London’s massive embankment scheme. An estimated cost was £725000. The actual cost was >£2 million and took over 30 years to build.

Vertical instead of horizontal vents were used resulting in ongoing erosion and decay from the elements. Rutland stone was used for restoration in the 1930s.

In 1941 an unexplored bomb fell into the Lords. A new chamber was built in1950. They elected to keep the adversarial cross bench arrangement of seating instead of adopting the more modern semi-circular system. Churchill quipped “We shape our parliament and parliament shapes us”

Mike Ogden gave a detailed illustrated account of the current layout and furnishings of Parliament. Currently there is a £4 billion plan for restoration and temporary relocation.

Here are some parliamentary anecdotes and quotes to finish off:

“The honourable Member is living proof that a pig’s bladder on a stick can be elected to Parliament.” —Tony Banks (Labour) on Terry Dicks (Tory)

“She probably thinks ‘Sinai’ is the plural of ‘sinus.’” —Jonathan Aitken on Margaret Thatcher

“The house has noticed the Prime Minister’s remarkable transformation in the last few weeks from Stalin to Mr. Bean.” —Vince Cable on Gordon Brown.

“The right honourable and learned gentleman has twice crossed the floor of this House, each time leaving behind a trail of slime.” —David Lloyd George.

“He occasionally stumbled over the truth, but hastily picked himself up and hurried on as if nothing had happened.” —Winston Churchill.

Our local hero Dennis Skinner has the sharpest wit of all, best attendance, lowest expenses, never accepts drinks from journalists and has often been thrown out of Parliament for protocol breaches. His Black Rod quips are famous and perennial:

“Tell her to sell up” – a reference to how the Queen could help the recession.

“Tell her to pay her taxes!”

“Tell her to read the Guardian!” (running a republican campaign at the time).

“Has she brought Camilla with her?”

“Is Helen Mirren on standby?”

“Any Tory moles at the Palace?”

“Royal Expenses are on the way.” – after the expenses scandal

To Roy Jenkins  (mixing up his Rs and Ws): I leave this party without rancour – to which Dennis replied: I thought you were taking Marquand with you “Every now and then you see the arrogance of Cameron, and that comes through every so often. It is the Bullingdon Club. When they were sat down, him and Gideon, and he says: ‘You know what we really want, Gideon? Every weekend, after we’ve roughed up one of those hotels, we need an army of volunteers to come in and clean it all up.’ And Gideon says: ‘Yeah, we could call it the Big Society’” Dennis to Dodgy Dave

“Tell the House of Lords to go to hell.”

“He’s lining his pockets” – an important quote, Skinner said what nobody else would but what they many thought about Tebbit in a non-exec position at privatised BT.

Finally perhaps the best of the lot, Skinner calling an MP a pompous sod:

Skinner: “I withdraw the word pompous”

Speaker: “That’s not the word I’m looking for”

Skinner: “I can’t withdraw both”