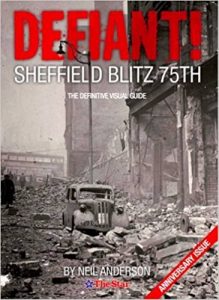 Neil worked in the publicity department of the town hall, and on the 70th anniversary of the Sheffield blitz, decided to write a book filled with recollections of the blitz from people who lived through it.

The reason for the blitz was to wipe out the armaments factories of the East end but the bombs were dropped on civilian areas in the suburbs and the town centre. A possible explanation for this will be given later.

Sheffield people were aware and expecting a raid and the steel works had stepped up production in the late 1930’s. Buildings were requisitioned for air raid shelters and many Anderson shelters were produced for local homes.

There was not very much evacuation of children at this time and many of the women were working in the steel works.

When war was declared initially theatres and entertainment centres were closed, but then after having no air attacks and hearing sirens screaming for many nights without an attack, citizens became rather blase.

In autumn 1940, Hitler decided to bomb Britain and London, Liverpool and Bristol were hit. There was still no bombing in Sheffield and early on December 12th people were going out to the cinemas, clubs and pubs as usual. The sirens sounded at 7 p.m. and no-one bothered to take shelter. 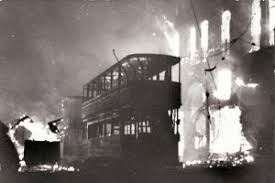 Down came the bombs, wave after wave of bombers, until 4 a.m.the next morning when the all-clear was sounded.

Devastation had hit the city centre, Atkinson’s, Cockayne’s, Redgates, C & A and Walsh’s were all flattened. Outlying suburbs of Gleadless, Nether Edge, Owlerton, Intake etc. were all hit. It was estimated that 2,000 people were killed and a tenth of the population were made homeless. One of the biggest losses of life was at The Marples Hotel in Fitzalan Square. It was packed with people, none of whom survived. The heat was so intense that a pile of coins were fused together. Fire crews came from Barnsley and Doncaster to help.The City Hall survived, a bomb dropped nearby landed in a water tank!

Lots of emergency centres were set up e.g. at High Storrs School, and advice centres were able to give help to many people. Atkinson’s and other stores opened small outlets at various locations throughout the city. Although the ledger, stating various customer debts, was destroyed people still turned up to pay off their debts.

There is a display of the Sheffield blitz in the Doncaster Aero Museum, and recently, due to the efforts of Neil Anderson, the Heritage Lottery gave a grant of £90,000 to hold an exhibition in the old fire station. Among the exhibits are the fused coins found in the ruins of The Marples Hotel and videos of people who experienced the blitz.

Footnote:
Knickebein…….. The Germans developed a system of “beams” – an enhancement of the previous “lorenz” system which were methods of “blind landing aids” used to help aircraft to approach an airport at night. The Knickebein system sent two beams from powerful transmitters at different locations on mainland Europe. These beams were calculated to intercept over the bombing zone in England. The English, under Churchill’s direction, devised countermeasures which “bent” the beams away from the target area. This would explain why so many bombs were dropped in civilian areas rather than the steel manufacturing plant in the east end.