Much of Sheffield’s part in winning the First World War, such as the manufacture of armaments and the sacrifices made by the city’s own soldiers on the front line, has been well documented.

Less well known, perhaps, is the huge contribution made during the conflict by the city’s numerous hospitals in treating no fewer than 70,000 wounded soldiers from all over Britain – as well as countries such as Belgium, America and Canada – who were transported from the battlefields of France and Belgium by train to Sheffield’s Midland Station.

Dr Mike Collins, who studied medicine at Galway University in his native Ireland but whose career was as a consultant radiologist in Sheffield until his retirement four years ago, is a member of the Sheffield Hospitals History Group, and he gave us a fascinating presentation entitled The Treatment of Soldiers in Sheffield Hospitals During World War I – A story of challenges and benefits.

Having listened to his thought-provoking presentation, what for me was the significant word in that title was ‘challenges.’ They were huge – logistical and financial, as well as medical .

The ‘base’ hospital was what had been a teacher training college in Collegiate Crescent, better known today as the Collegiate Campus of Sheffield Hallam University, which was fitted out with operating theatres and wards. 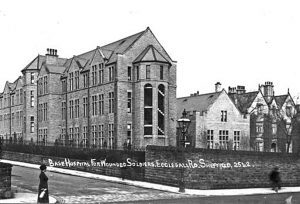 Fir Vale Infirmary, which 50 years later would become today’s Northern General, was the biggest of the city’s existing hospitals – with 500 beds – to be used for the treatment of wounded soldiers. Ecclesall Infirmary, later known as Nether Edge Hospital, had 150 beds, the Royal Hospital on West Street had 140, the Royal Infirmary on Infirmary Road had 133 and Winter Street Hospital (St George’s) had 120 .

But by far the biggest centre for the treatment and recuperation of soldiers, with no fewer than 2,000 beds, was the former Wadsley Lunatic Asylum at Middlewood which became known as the Wharncliffe Hospital. It opened as a war hospital in May 1915 and operated until July 1920, latterly as a dispersal centre, by which time there had been 36,665 admissions.

Staffing these centres of treatment, as Britain struggled to cope with the repatriation of two and a half million soldiers, were officers from the Royal Army Medical Corps based at what is now the Yorkshire Regiment reserve centre in Glossop Road, existing doctors and nurses from the various hospitals, local GPs, university staff and nurses from voluntary organisations such as the Red Cross.

The base hospital at Collegiate Crescent also controlled convalescent homes in an area stretching as far afield as Derby, with local centres such as Greystones School and Bramall Lane cricket pavilion (150 beds each), Lydgate Lane School (130 beds) and Carterknowle School (115 beds).

Commanding Officer of the whole set-up was Lt Col Arthur M. Connell, later professor of surgery, whose portrait hangs in the Royal Hallamshire Hospital to this day.

Dr Collins accompanied his talk with slides of original photographs and excerpts from such items as house surgeons’ day books from the various hospitals, which he had gleaned from the Sheffield City Council Archives in Shoreham Street. Mike praised Sheffield as being one of the best cities in the country for keeping historical records. “The archives form a wonderful resource,” he said.

Photographs of wounded soldiers arriving in Sheffield are relatively rare, for the simple reason that the authorities knew that the arrival of thousands of war wounded into the city would be bad for the morale of the local civilian population, so the movements were often carried out under cover of darkness. 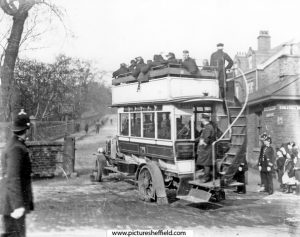 “Most of the arrivals would be at night,” Mike explained. “The casualties were transported by train from the southern ports to the Midland Station, and from there taken to one of the hospitals in either open-topped buses, in the case of the walking wounded, or in four-person ambulances in the case of the more badly injured.”

Typical entries in the surgeons’ reports were: “Today we received 20 soldiers who have just been on active service in Belgium, some of them extremely seriously injured… We have received 400 sick and terribly wounded soldiers in four days… Because of the shortage of resident officers, ward sisters are to be trained to administer anaesthetic…”

Somewhat bizarrely, a report from May 1915 complained: “We have the almost intolerable situation of people coming into the hospital and hospital grounds, who have no business to be there but want to see the soldiers.”

They would get their chance later when soldiers – who might be suffering from head injuries, burns or amputations – had recovered sufficiently to be allowed out to walk around Sheffield prior to their transfer to one of the recuperation centres or, in less severe cases, back to fighting in the war.

While the city’s hospitals were in danger of being overwhelmed by the influx of casualties, the situation also brought financial problems, particularly for the Royal Hospital and Royal Infirmary which were both run by charitable bodies funded by donations from the public. They were forced to appeal to central government for help.

The situation also had a major impact on the local population, who were unable to get into hospital for routine treatment. At Wharncliffe, the former lunatic asylum, more than 1,600 inmates had to be transferred out into the wider society, although just a dozen were retained to tend the hospital farm. More than 130 staff from the asylum were given medical training at the Royal Infirmary over a period of just two weeks to prepare them for the influx of wounded soldiers.

Perhaps it was more than coincidence that Wharncliffe’s specialities included treatment – in what became known as the ‘mental block’ – for shell shock, or post-traumatic stress disorder as we call it today, and other psychiatric conditions. Sheffield’s hospitals and their staff played a crucial role in helping to heal the terrible wounds, both physical and psychological, of what was optimistically called the war to end all wars.