A wide subject you would think, but Patrick Harding did more than justice to it.

Oak trees seem to be as familiar in Great Britain to the Ancient Britons as they are to us today. A local giant oak is situated in Worsborough, which is about 1,120 years old. Estimates suggest that oaks have grown here for at least 10,000 years, and earlier still before the ice age when they temporarily disappeared. 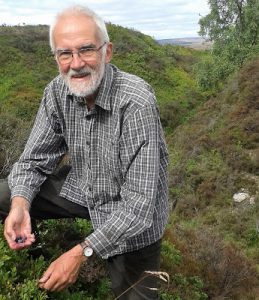 rches – such as at High Bradfield – and cathedrals.

Stag headed oaks, Patrick explained, are phenomena of age. It takes 300 years to grow, 300 years to consolidate and finally 300 years to die. In those last years, fewer nutrients are supplied to the top of the tree so dead branches are left.

Royal Oaks are so named because the future King Charles II hid in an oak tree whilst escaping capture in 1646. Scottish oaks were mentioned in Shakespeare’s Macbeth: ‘until Great Birnam wood to high Dunsinane hill.’

In earlier times oaks were felled whilst still quite young. Apparently, the lack of strong axes didn’t allow for felling when larger. And coppicing was used extensively for production of fuel and charcoal. Because of oak’s durability, it was used in the building of houses and barns. And oak pegs were used in cruck joints instead of iron nails because mature oak is too hard to bang nails into. This method is still in use in cathedrals and churches.

Oak is used in the manufacture of barrels, tubs and vats. Natural wood tannin acts a preservative in the storage of whisky. It is also used in leather tanning and for strong wheel spokes. Early 19th century carriages used oak as a preferred material. The production of charcoal, the smelting of iron and glass making all used oak.

Ships of all sorts were constructed for trading, fishing and pleasure, and the Royal Navy relied on oak for strength and endurance. The wood lent itself to providing naturally shaped knee joints, ribs, keels and decking. I wonder how many tons of oak were consumed in large ‘men of war’ ships and, of course, in the lesser craft.

The number of parasites, insects, fungi and diseases which afflict oak trees is astonishing. Changing climate temperature and rainfall also afflict oak growth, unless you may be like some who deny climate change and global warming, in which case you can forget the warnings.