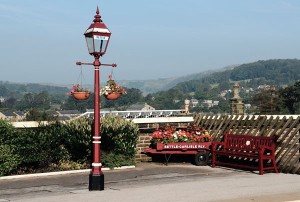 Stephen began his 13th presentation to us since 2001 where he finished off in Part 1 of the talk on the 28/1/13, near Leeds. The exact location being Kirkstall Abbey, built in the 11th century, which is situated  on the Midland Railway line, Leeds to Carlisle section, opened in 1876. The line closed in the 1960s following the publication of the  Beeching report, just 50 years ago, but it re-opened in 1971.

With his faithful German shepherd dog Wrawby for company, and occasional protection, we were taken on an absorbing trip, wonderfully illustrated with genuine unenhanced slides and accompanying narrative. We journeyed  through Shipley, alongside the Leeds to Liverpool canal, Keighley, Skipton, Gargrave, Hellifield (the gateway to the Dales), Ingleton, Hawes, Settle, and Ribblehead, up to Dent station. This is the highest mainline station in England at 1150 feet above sea level, just across the Yorkshire border, in Cumbria.

We heard tales of Victorian tea rooms, a must to visit, and a Light Railway which had to be closed due to vandalism. There was the Worth Valley Railway spur to Oxenhope from the mainline station at Keighley, with Demems signal box, that is gas lit and has a potbellied stove, at a request stop. The occasional steam engine passes by in front of the stationmasters house alongside the track which Stephen drooled over owning, and we saw Oakworth tunnel of ‘Railway Children’ fame.

Once out onto the bleak Moors, the slides became even more stunning, further appreciated when we heard tales of long treks in different seasons, to get the right picture. Trudging through snow, or walking at night to get the sunrise. There were pictures of the river Ribble, Ellwith Bridge, Ribblehead viaduct, the ‘3 Peaks’, Artengill viaduct and Dent Head viaduct. We heard a tale of a warm welcome he received at the Blea Moor signal box near Ribblehead, where the water for the signalman was still delivered daily on the first train.

The engineering feats and human sacrifices made during the construction of the line, coupled with Stephen’s dedication, enthusiasm and love of railways and great Yorkshire outdoors, were reflected in the talk. We also heard examples of his poems which he read to us and were very much appreciated.

He knows we can’t resist inviting him again, as he left us in suspense part way through the next journey. Watch this space!