David, a regular speaker at our Probus, is an Elizabethan Historian, a nationally known speaker and Chair of The Friends of Sheffield Manor Lodge.

He became a guide at Manor Lodge in 2004, at which time he could find only a single chapter to read about Mary Queen of Scots and her 19 years of captivity in the Sheffield area. David chose to talk to us about this period of captivity, which he has since researched and written about in his new book “Mary Queen of Scots – The Captive Queen in England, 1568-87,’’ and which has been 12 years in the making.

Mary, born in 1542, became the rightful Queen of Scotland when very young. She was a cousin of Queen Elizabeth I, both being related to Henry VIII. But Mary, the daughter of the Scottish King James V, was a Catholic, and Queen Elizabeth of England was a Protestant. 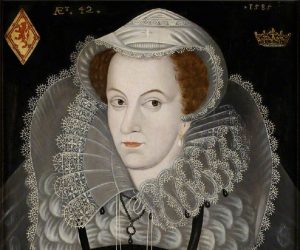 Protestants gained control of Scotland during Mary’s youth, so she escaped to France but returned to Scotland to reign in 1561, at the age of 18. Still a Catholic, she reigned as Queen and had a son James with her first husband, Lord Darnley.

This marriage and the subsequent one were controversial and disastrous, neither of which had been sanctioned by Elizabeth as protocol demanded. Mary’s right to reign was eventually challenged and she ended up in a Scottish prison.

However, she escaped and sailed for England, landing at Workington on 16th May 1568 against all advice, and totally unannounced, in the hope that Elizabeth would help her to regain her Scottish throne as she had once previously promised.

But Elizabeth now had a problem with a Catholic Queen on Protestant English soil. Initially, Mary was held in Carlisle Castle, but within three or four months she was moved south to Bolton Castle in Wensleydale, away from the coast and the Scottish border for security. Elizabeth had concluded that she was a threat to her throne and could become a Catholic rallying point for English revolts, or invasions from Spain, France or Scotland. For that reason, she could not release her and needed to keep her in the easiest place to defend, should there be an attempt to rescue her.

To begin with, a conference in York was convened to establish the facts about her marriages, with a view to resolving her position in Scotland, but this was inconclusive. Mary was then moved further south, and further from the sea, to secure places centring on Sheffield. The sixth Earl of Shrewsbury, at his own cost, was engaged by Elizabeth to be Mary’s ‘jailer.’ The main locations used to hold Mary over the next 19 years were, Tutbury Castle, Wingfield Manor, Worksop Manor, Chatsworth, Sheffield Castle, and Sheffield Manor Lodge. The Earl’s wife, Bess of Hardwick Hall and Chatsworth, was a friend of Elizabeth and helped to look after Mary, as well as keep an eye on her.

Some of the places were unhealthy, so Marys’ health deteriorated, even though she was permitted occasionally to take the waters at Buxton, when she stayed at what is now the Old Hall Hotel.

So we had Mary, on the one hand, involved in intrigues and plots, and Elizabeth, on the other, imprisoning Mary and thwarting any Catholic plots to undermine her, or the established Protestant faith. Sir Francis Walsingham, the spymaster, and Sir William Cecil, Elizabeth’s main advisor, were strong advocates for executing Mary, to solve the problem. However, monarchs believe that they are chosen by God to reign, so Elizabeth couldn’t bring herself to sign the death warrant of another monarch.

The Duke of Norfolk, one of the most influential persons in England, and a Catholic, plotted to marry Mary and take over the throne. He was eventually executed for treason, with Elizabeth signing the death warrant. A revolt (the only one during Elizabeth’s reign) came from the Northern earls in the Catholic North of England, but this petered out. Of the leaders, Northumberland was tracked down. Reprisals in the North, by Elizabeth’s army, were ruthless, to discourage any other revolts. The other leader, Charles Neville, escaped to Spain but had all his property confiscated.

Relationships slowly deteriorated between all the parties involved in Mary’s detention. The Earl’s marriage fell apart as well as his health and finances, and Mary’s health suffered because of the conditions under which she was held. From being a sporty person used to hunting, falconry, archery and real tennis, her movements became very restricted as plots to rescue her came and went. So she spent her time doing embroidery, which is now on exhibition in Oxford, Norfolk and Edinburgh.

Finally, one of the plots – in which it was proved that Mary was implicated – was deemed to be treasonous, so eventually Elizabeth reluctantly signed Marys’ death warrant and at the age of 44 she was executed. She died for her faith at Fotheringhay Castle. Elizabeth was said to have ‘won’ in life, but ‘lost’ in death, as ironically, James VI of Scotland, Mary’s son, who was a Protestant, also became James I of England when Elizabeth died. This was the first time both countries had had the same monarch.

We learnt that there is a film being made at a cost of £180m on this subject, which is due to be released in January 2019. It was a very enlightening and enjoyable hour. For more information, David’s book gives it all.