These days John Stubbs is a volunteer with Hardwick Hall; before retiring he was much involved with special needs children. To give a background to the building of the hall, he gave a description of Bess of Hardwick’s life. In 1522 Bess was born to John and Elizabeth Hardwick, who lived in a modest manor house on the site of the Old Hardwick Hall. They were sheep farmers around Hardwick and moderately prosperous. John died at about this time while in his forties. Elizabeth was obliged to sell off much of the estate to survive while Bess grew up. At the age of 12 Bess left home to serve at the nearby Codnor Castle. There she met and married Robert Barlow, who was heir to a gentry family. She was 15 years old. Eighteen months later, Robert died and she gained an inheritance.

Bess then went into service with the Grey family and found herself at court in London as Lady in Waiting. Here she caught the eye of an older courtier, William Cavendish, Treasurer of the King’s Chamber. They married in 1547. Six of their children reached adulthood and they bought land that became the Chatsworth Estate before William died in 1557.

Two years later Bess married again, this time to Sir William St Loe, Captain of the Queen’s Guard and Grand Butler of England. The marriage to St Loe was short-lived as he died in 1565, but again Bess managed to secure most of his great wealth for herself. Secure at Chatsworth and very wealthy, Bess married for a final time, this time to George Talbot, sixth Earl of Shrewsbury, in 1567. He was a statesman high in royal favour, and Bess added the title of Countess to her great wealth.

Shrewsbury was made custodian of Mary Queen of Scots, who remained in his charge for the next 15 years, moving from one another of his many mansions, including Chatsworth. The strains of the royal ‘guest’ put pressures on Bess’s marriage and after several years of bitter quarrelling Bess left Chatsworth and came back to her childhood home at Hardwick. For the next few years Bess started to construct a new house around her old family home – the building we now know as Hardwick Old Hall. 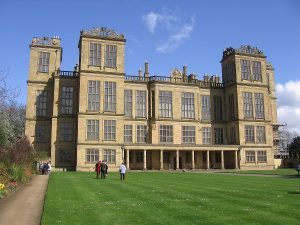 In 1590 Shrewsbury died, and work started on Hardwick New Hall. A prominent architect called Robert Smythson was commissioned and he introduced new ideas of symmetry and of using vast areas of glass. The heights of each storey increased from the ground upwards with servants at ground level, the family rooms on the first floor and the state rooms above. The architect re-introduced the use of 50mm thick lime-ash floors over green timbers that hadn’t been used since Roman times.

A £25m refurbishment of Hardwick Hall has recently been undertaken with large areas of glazing replaced with eastern European glass. The Hall has a full-time team of masons working on the wall fabric. As visitor numbers steadily grow there is a need to increase and improve the visitor facilities. The Stable Yard provides much of this area.

The smithy and cart shed now provides a building to entertain schoolchildren. The East Stables house the gardening department where there are plants for sale. The Coach House and the Ox House provide an extension to the shop and offices. The West Cottages that predate the Old Hall are used to accommodate a brewery, a dairy, a bakery and a chandlery, and a slaughterhouse now has a restaurant at mezzanine level.

Hardwick Hall was taken by the State in 1956 in lieu of death duties and given to the National Trust, but is managed by English Heritage.