Our Treasurer, who spoke in Part 1 about his National Service days in an RAF band, agreed at short notice, to entertain us with further yarns of his time in the Service, because the scheduled speaker had become incapacitated. Geoff pointed out that he had obviously not been first choice, as the Chairman admitted he had made several telephone calls before contacting Geoff.

Not fond of school, Geoff left at 16 with 5 ‘O’ levels and ended up in Local Authority employment, which didn’t suit him.

National Service called, and as he had been in the Boys Brigade playing and winning accolades in the band from ages 11 to 19, he found himself in the RAF band.

Advised to apply for a commission, he went to Uxbridge for a weekends activities and interview. Imagining himself as a pilot when issued with new kit, he had to solve problems and give a talk. He was unsuccessful, so, gave up further applications.

Reflecting on times in his billet, shared with many others, especially the first 6 weeks, when they were not allowed off the camp, there were:-

‘Bull’ nights when the Sergeant came to inspect the cleanliness of the billet and layout of each persons equipment, which had to be in a prescribed order. 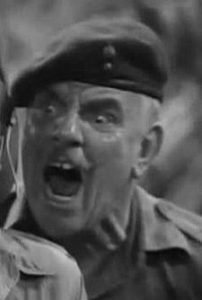 Some were verbally savaged, and had their belongings strewn around the billet. The rest thanked their lucky stars that they hadn’t been treated the same way.

‘Beret’ nights. The troops were instructed to wear wellington boots and beret over their pyjamas, in bed, for a possible fire drill at midnight. This, of course, was a hoax, to much amusement from  the older troops returning from the pub, to see a line of men scrabbling out of a billet and lining up in their pyjamas, boots and beret, in the response to the fire alarm. Geoff missed this indignity by sleeping through the alarm.

Applying to swap his posting from Helmsley to Gainsborough, and although warned, he ended up being posted abroad to Omaha, Nebraska, for 6 weeks. This was a continually busy airport with big planes coming and going on their way to and from N.Canada. The billets were sited at the end of the runway, with constant noise and vibration. Sleep deprivation meant on one occasion he slept through 4 films until 6am, at an all-night movie in a car park.

On his return, Geoff worked in Bomber Command as an Accountant at RAF Honnington, near Thetford. Managing to ‘wangle’ his work to allow each weekend to be a long one, he recounted tales of how he got to Sheffield from East Anglia before Motorways, by hitching, cadging lifts, in dodgy cars, and sometimes in much discomfort.

Eventually posted to Germany, with his wife, he bought an old Ford Popular, traded his cigarette coupons for petrol coupons, put 4 large full petrol cans in the boot, bought at 1/6d per gallon, and toured Europe, including a stay under the 1925 Olympic ski jump at Innsbruck. The courage of those who jumped off, remains with him.

A final reminisce was of a Squadron Leader with a severe limp leading the troops not in a straight line, but with a bit of ‘left hand down’ because of his disability.

A natural raconteur, Geoff kept us well entertained with this and other yarns. A very worthy replacement for the scheduled speaker, he was warmly thanked.