Once again highlighting the depth of knowledge within our own membership, we were treated to the second half of Tim Stephenson’s exploration of the immensely powerful and wealthy Medici family.

Prior to his retirement Tim, a professor of pathology, was Clinical Director of Laboratory Medicine at Sheffield Teaching Hospitals and an honorary professor at Sheffield Hallam University. Another excellent audience of 40 members, plus three guests from our waiting list, watched our latest Zoom presentation, eager to hear the conclusion of the Medici talk which Tim had started on 3rd August.

The answer to the question posed in the title of Tim’s presentation is a resounding “No.” The wealth side of the equation wasn’t a problem for the Medicis, the banking and political dynasty who first came to prominence under Cosimo de Medici in the Republic of Florence in the first half of the 15th century.

The family, as Tim pointed out, was richer than most monarchies, most nations and the papacy. But their health became decidedly ‘iffy’ through a combination of over-rich diet, over-protection from the outside world and natural sunlight, and over-selective breeding (rich families only inter-married with other rich families, in the hope of increasing their wealth even further).

The subtitle of Tim’s concluding talk was ‘Part 2: The Diseases, the Suffering,’ and he explained how the Medici family has been the subject of medico-historical interest as many of its most prominent figures were known to have suffered from debilitating illnesses throughout their lives.

The risks of wealth included assassination; in 1478, Guliano Medici was assassinated by the rival Pazzi family in front of 10,000 people during an Easter church service.

Although the deficiency of vitamin D that causes rickets is often linked to the malnutrition and polluted, cramped and sunless living environments of the urban poor, scions of the Medici family, Grand Dukes of Tuscany, suffered from rickets.

In 2003, researchers at the universities of Pisa and Florence began the exhumation of 49 Medici family burials in the Basilica of San Lorenzo in Florence. Nine small coffins held the remains of Medici children who had died between birth and five years of age. X-ray and osteological analysis of the remains found that six of them had the distinctive signs of rickets – curved arm and leg bones – even in very early infancy.

So these children of great privilege, raised in the lap of Renaissance luxury, not only suffered from vitamin D deficiency as they were growing up, but were afflicted by it practically from birth. Rickets, Tim pointed out, is easily prevented by eating foods such as eggs and cheese, and by spending short amounts of time exposed to sunlight, which triggers vitamin D production. Breast milk was supplemented with ‘paps’ made of soft bread and apples. Neither cereals not breast milk contain much vitamin D, and fruit contains none. 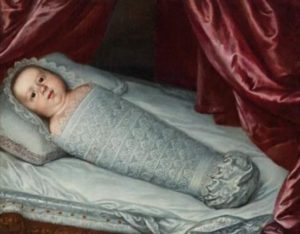 The Medici children, wrapped in many heavy layers of swaddling and cocooned in grand houses, probably didn’t get the same amount of sunlight as their ‘less fortunate’ peers. The researchers concluded that the mothers themselves might have had low-level vitamin D deficiency because of low light exposure of high-status women, or as a result of frequent childbearing. 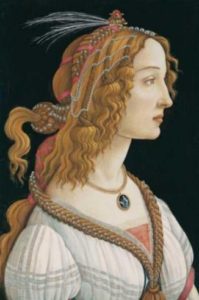 The ladies of the household would be heavily made up, often using white lead and vermilion which, at that time, was derived from cinnabar, or mercury sulphide, and – with an SPF (sun protection factor) of 1,000 – blocked out virtually all ultra violet.

The Italian Renaissance princes had a much wider choice of food than other classes, but apparently did not avail themselves. Historical records reveal that after meat and wine, which constituted the nucleus of the nobles’ diet, eggs and cheese appear – but infrequently. In the aristocratic diet, vegetables occupied a secondary place, with an almost total absence of fruit. Gout, generally believed to be caused by an over-rich diet, was also prevalent.

Since the average age of the membership of Stumperlowe Probus Club is well over twice the life expectancy of the aristocratic 15th century Florentine, one can only presume that we’ve all been eating our greens.