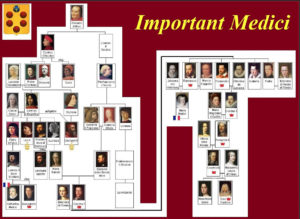 Professor Tim Stevenson has retired as the Clinical Director of Laboratory Medicine at Sheffield Teaching Hospital and is now a member of Stumperlowe Probus Club.  His talk was the first of a two-part examination of the early Medici family and was given using Zoom.

The story starts with Giovanni di Bicci (1360-1429) who dealt in wool in the Lombardy region of Italy.  He introduced and controlled a standard system of weights and measures in Italy and created the Medici Bank. 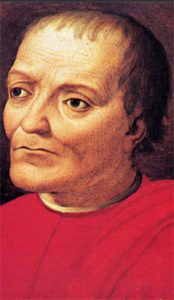 The weights and measures were used to the Medici advantage as was the control of units of currency, exchange rates and commission rates.  This led to enormous power and wealth.  Greater even than the likes of today’s Amazon, Apple and Facebook combined.  The family were great patrons of the arts.

The family has two branches headed by Giovanni’s sons Cosimo and Lorenzo di Vecchio.  Cosimo Medici (1389-1464) is associated with Florence and supported Brunelleschi and Donatello amongst many artists and architects. 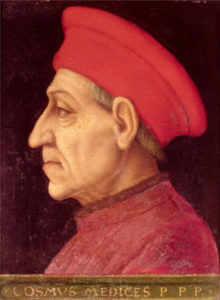 This branch produced Lorenzo the Magnificent and Pope Leo X (1475-1521) who was patron for Raphael. Plus Pope Clement VII. 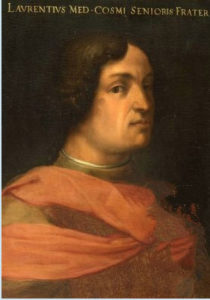 The combined houses produced 4 Popes, two Queens of France and several other kings.  With such power there was much inbreeding and ill feeling with other powerful families.  For their physical safety, it was necessary to live in fortified palaces and use tunnels to travel between buildings.  Family members therefore did not enjoy much direct sunlight and were very prone to debilitating diseases.

The second part of Tim’s talk is eagerly awaited, where the many disadvantages of such wealth and power will be considered.