Dave Petley gave a superb talk to 41 members, guests, and an unknown number of wives and girlfriends. It was the second highly successful Probus Zoom presentation since COVID-19 lockdown (thanks to Peter, Graham, Richard and Jacko).

Dave is Vice President for Research and Innovation, University of Sheffield. His research focus is international landslide mechanisms and he advises the Hong Kong Government, blogs with the American Geophysical Union and is a Council member of the Royal Geographical Society. He has a great gift for putting over difficult concepts clearly and concisely.

There were seven large spoil tips rising up the hillside and close to the village of Aberfan, where 116 children at Pantglas school and 28 adults lost their lives in the infamous landslide of the morning of 21 October 1966 (Fig 1). 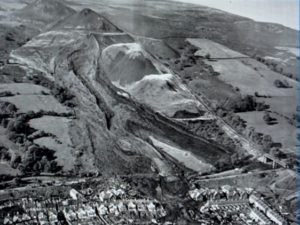 A primitive ropeway led to a crane at the top, where there had been loose tipping for several years. The tipping gang (Fig 2) arrived at the top at 7.30am and found it had subsided overnight.

Fig 2 Ropeway and tipping gang on the spoil heap 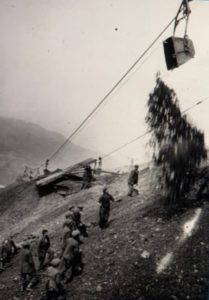 Finding that the telephone to the pit below wasn’t working, one of gang walked down to raise the alarm. The crane driver stayed at the top and saw its tip move again, but rising up initially. The solid mass, as it broke free, rotated and “bulldozed” ahead, causing the initial rise then the downhill slide. Rotation pulled away solid blocks which then fragmented into a 40000 ton flow onto the village 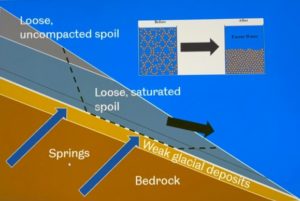 The NCB knew of the Aberfan springs (Fig 4), making no earlier attempt to divert the water and failing to anticipate, monitor and rectify

Fig 4 Pre-spoil heap topography of Aberfan and adjacent hillside with the springs circled. 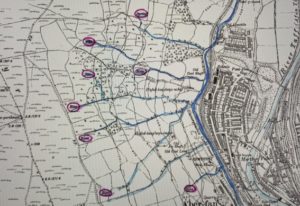 They were aware of similar tips with landslide potential. Furthermore, uncontrolled tipping on top of loose layers progressively weakened the base to facilitate a slide. There were earlier landslides in the area at Abercynon (1939), Aberfan (1944 and 1963), and Rhondda (1965). The NCB, nationalised in 1946 and headed by Lord Robens, chose to ignore the danger.

The school was inundated and the children at the rear of the school had no chance. Classrooms at the front remained intact and some survived. Parents, many of them miners, attempted to rescue their own children and others before the more formal rescue effort could begin.

The Tribunal was conducted by Lord Justice Edmund Davies, who had sentenced the Great Train Robbers. He was highly critical of the NCB, in denial until day 65, but particularly its chairman Lord Robens, whose investiture at the University of Surrey was coincidentally and cynically on the night of the disaster. He chose not to go to Aberfan. However he eventually made amends by setting up the Health and Safety Executive, a world leader.

Removal of tips was recommended after the Tribunal but the NCB pleaded it would lead to bankruptcy. £150,000 was covertly sequestered (!) from the £1m+ disaster fund by the NCB. This was eventually repaid into the disaster fund by the Blair Government, but without interest, until Gordon Brown finally repaid in full. Compensation was capped at £500 for each family, Lord Robens claiming that they “wouldn’t be able to cope with a larger sum”.

There was another landslide at Tylorstown in February 2020, due to rotational spoil heap failure. Spoil heaps now have mixed ownership and are not necessarily well-monitored. Degradation and climate change is renewing interest in future potential landslides in Wales.

Landslides are a major problem around the world. Loss of life is rising with time, confirmed by evidence from Dave Petley’s own data collection from 2004. Tibet, Brazil and recently Myanmar have had disastrous rotational landslides, in the latter case precipitated by unemployed jade miners scavenging and disturbing spoil heaps.

It was a surprise to learn there is no book written on the Aberfan disaster, despite the emotional memories lingering on and a detailed sequence in Netflix series “The Crown”. Dave’s retirement project maybe?