Recently we have been reminded of the anniversaries of key dates in World War II and this was a timely presentation on the role of the “ French Resistance “ and its contribution to the liberation of France. The phoney war ended with the Germany’s lightning attack on France in June 1940 followed by 6 weeks of fighting. France was captured and split into the Occupied and Non- Occupied Zones under the control of Vichy France which was the collaborationist ruling regime in Nazi-occupied France.  A natural reaction for any citizen in the situation would be to launch immediate resistance.  However, the fighting resulted in 300,000 dead or severely injured and 1.8 million prisoners.  France was in no position to launch any meaningful resistance to the occupiers. Indeed, there was a complete collapse of any resistance under the principle “ Politics  of Collaboration “  directed by Marshal Petain. 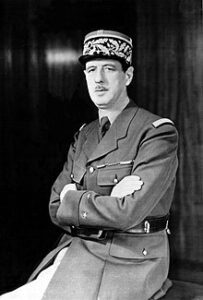 Charles de Gaulle was exiled in England but was a powerful voice in urging French soldiers to take up arms and form the “Free French Army “. He said “The flame of French resistance must not or shall not die “.

Early resistance activity was primitive and lacked coordination involved in publishing news sheets, propaganda , cutting telephone wires and general disruptive behaviour. Those who were caught were invariably shot as a strong deterrent to others. In November 1940 hundreds of Parisian school children bravely demonstrated against the regime but were brutally repressed. The communist party had members and resources and would have been active but Stalin and Hitler had signed a pact that Germany would not invade Russia so they were caught in a conflict of loyalties. However this was resolved, when Hitler attacked USSR on 22nd June 1941 ripping up the Hitler/Stalin pact.  The communist party youth took action and killed prominent Germans.  Retaliation was vicious and for every German killed 20/30/50 civilians were shot.

Resistance was still piecemeal and largely uncoordinated. A Jean Moulin set out to visit resistance groups across France and coordinate information on the groups, a task needing the utmost tact and trust no doubt !    In December 1941, USA entered the war after Japan bombed Pearl Harbour.  At this news De Gaulle declared “ We’ve won” and he was right,  thankfully.. The Allies controlled the propaganda and the BBC ( Radio  London) communicated with resistance through coded messages to assist with the dropping of supplies and agents.  The Germans continued to hound the Jews and over 13,000 were deported and many exterminated on mass.

By 1943 the resistance had become more active.  The Vichy government made a concession to the Germans agreeing that all able bodied Frenchmen should be forced to go and work in Germany. Many refused to go particularly in the south and hid in the hills, calling themselves Maquis which translates as “taking to the hills. “ The resistance leaders saw quickly that here was a body of young men not only numerous but desperate, brave, trainable and useful.  Jean Moulin united the resistance under the leadership of Charles de Gaulle. The resistance was now derailing trains, destroying factories, informing the Allies of German troop movements, aiding downed airmen to escape German capture and return to England. Captured resistance fighters were shot. 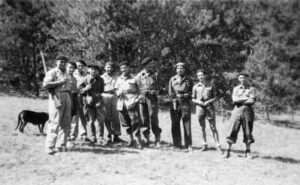 Members of the Maquis – including two SOE operators

The end of German occupation was in sight. The D-Day landings were on the 6th June and the Allies eventually breakout of the Normandy landings on 13th July.  The French resistance were able to give pre-invasion intelligence about German troop movements and coastal defences as well as maps and photos to the Allies, all the time disrupting  German activity. Charles de Gaulle visited the town of Bayeux in N.W. France on 14th  June 1944 and he was immediately acclaimed by the public as their figure head which was an embarrassment to the Allies.  The Germans surrendered on 25th August 1944.  A major rally on 26th August 1944 attended by 1 million people propelled Charles de Gaulle to power.

The French resistance made a significant contribution to the defeat of the Germans and the liberation of their country.    Matthew raised an interesting question     “What would we have done if Britain had been  invaded ? ”    Answers please !    An excellent talk, well prepared and professionally presented on Zoom.

For those of you who wish to learn more, Matthew has written a book available on Amazon  :-

The Resistance  — The French fight against the Nazis.