Mary Grover is a lady with wide ranging interests.  After retiring from Hallam University in 2011, she has been a leading figure in “Reading Sheffield”.  Reading Sheffield is a linked group of projects connected to the experience of reading books.  Her talk stems from her studies into the period from 1925 to 1955.

Whilst interviewing Sheffield ladies in their nineties, she learned about a group of Sheffield girls and boys that wrote “Confession Books” in the 1930’s.  By studying these “books”, Mary was able to follow the changes in thinking of young people in the lead up to and during the last World War by noting the authors being read at the time.

Mary Wilkinson was 16 when she wrote her first “Confession Book” in 1937.  Her father was a printer but became unemployed in 1935 and she had to leave school and train as a secretary.  In her spare time, she learned dancing at studios on Psalter Lane and read books.  It was the time of big bands and she and her friends had definite preferences for the different stars at the time.  Listening to the wireless was an important leisure time activity not only for the music but Dickens plays were very popular.  Her confessed favourite authors besides forgotten novelists included Charles Dickens.

Mary Grover felt that young people in Sheffield in the early 1930’s were not too interested in international matters but this changed in the more immediate pre-war years. 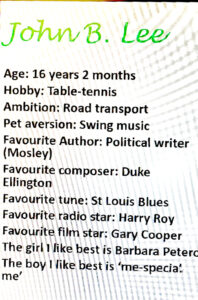 John Lee was a teenager during the lead up to the war.  Whilst he lists his hobby as table tennis and his favourite composer as Duke Ellington, his favourite political writer was Mosley.  This shows that fascism was a subject that was being openly discussed by young people in the mid-thirties.

There is some evidence that more people started to read newspapers.  The father figure would read the newspaper when he got home after work and children would want to learn how to read it as well.  At the onset of war, Joseph Lamb of Sheffield Libraries played a blinder by buying thousands of copies of popular fiction for the city’s libraries before books became in short supply. 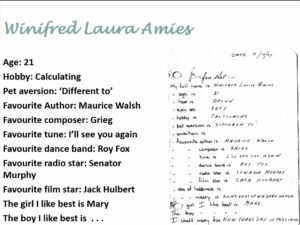 Mary’s talk revealed how a person’s reading choices reflect the issues of the day and the prevailing social structure.  More can be learnt from the Reading Sheffield website and from her book to be published next year!