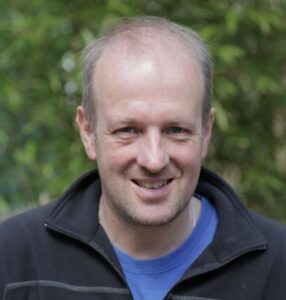 What a fantastic, emotionally charged talk by Marek about his family origins in Warsaw during the Nazi occupation of Poland!

Marek himself grew up in Sheffield in the 1960s, leaving for Durham in 1992 for an academic career in applied chemistry and physics.

Much of his talk centred on the wartime experience of his father. Witold Szablewski, perhaps unusually, spoke freely to Marek before his death in 2008. This was the catalyst for the award of a Winston Churchill Fellowship in 2011 to explore the family’s involvement during the occupation in more detail. The aim was to ensure that the horrors of that time are never forgotten or diluted. In the words of Primo Levi, an Auschwitz survivor, “It happened, therefore it can happen again: this is the core of what we have to say. It can happen, and it can happen everywhere”.

Poland’s history was almost obliterated during World War II. So Marek now spends a good deal of his time talking about his family’s time in Warsaw during the Nazi occupation to groups like ours and particularly school children.

Marek’s father, Witold Szablewski, was a tool maker, settling in Sheffield after the war 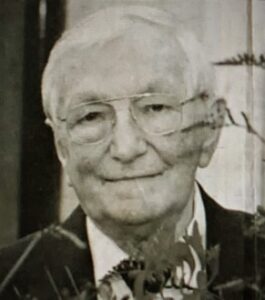 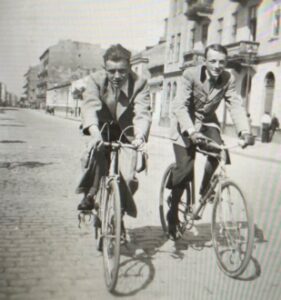 A younger Witold Szablewski on the right

The building in the background is the only pre-war building left in that street, a vivid example of the wholesale annihilation of the city by the Nazis.

Witold Szablewski returned to the rebuilt city in 2004 as a hero in recognition of his role in the Warsaw Uprising and in remembrance of the thousands of Poles whose lives were lost. 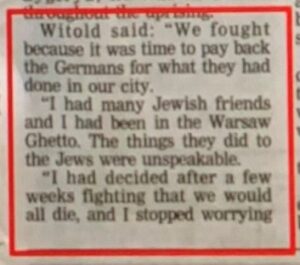 Poland’s turbulent history is also represented by a series of maps of its ever-changing borders from warfare. 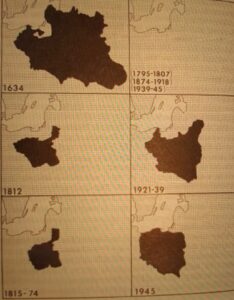 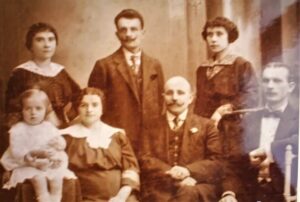 was a printer and trade unionist, arrested by the Russian authorities on multiple occasions for organising strikes, and spending time in Tsarist prisons. He had a Russian wife and was conscripted into the Army. Captured by the Germans, he escaped from Lamsdorf (later StalagVIIIB) and fought in the Polish uprising which led to independence, by which time his Russian wife and child had disappeared. He filed for divorce.

He became a policeman, remarried and Marek’s father was born to his second wife, who died a few years later 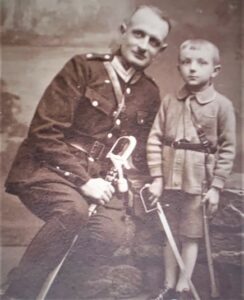 His Grandfather’s reactionary behaviour overtly tempered after he became a detective. He then married a Jewess, and was working at the Škoda factory in the mid-1930s, probably also undercover when corruption in the company was rife, for instance, issuing false quality certificates.

He then managed blocks of flats claiming that he lost his police job “because his wife was Jewish”.

Marek’s father, Witold, became an apprentice tool maker in specialist surgical equipment in the Ghetto. During the occupation, the family house was exchanged to one outside the Ghetto wall. He had to travel in and out every day to work but often carried money, obtained by selling contraband, into the Ghetto.

Jews were expected to walk in the gutter if a Nazi passed by, schools were shut, only a basic education was available, Jewish bank accounts were frozen, and Chopin was banned. Life was very difficult and violent. For instance a statement in a 1940 issue of Völkischer Beobachter, the Nazi newspaper; “In Prague, big red posters were put up on which one could read that seven Czechs had been shot today….  if I had to put up a poster for every seven Poles shot, the forests of Poland would not be sufficient to manufacture the paper”.

The Ghetto was large with an area of 1.5 square miles and 300,000 Jews within. Enclosure walls across tram tracks had “typhoid” notices to keep people out. It was completely destroyed by the Nazis at the end of the war as the Russians’ moved in. 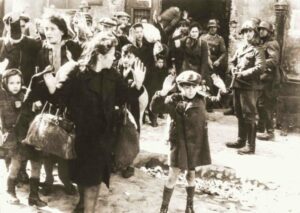 This picture shows Josef Blösche, the Warsaw SS-Rottenführer, (with the machine gun) rounding up Jews during the Uprising. He was nicknamed Frankenstein because of his cruelty and he was subsequently executed for war crimes.

Marek’s father, who was not carrying Jewish papers himself, was sworn into the Resistance. As a keen photographer, he recorded troop movements. At one point he was arrested by the Gestapo with a gun to his head but bluffed his way free and lying that he had no knowledge of his Jewish mother’s whereabouts. On another occasion he was carrying a hidden message for the Leader of the Jewish Council, when the offices were raided by the Gestapo. He was lent a Star of David armband to evade capture within the Ghetto.

Witold gave Stefan’s daughter’s (Russian) birth certificate to his Jewish wife, together with its Nazi tax stamps. She was then able to masquerade as his own daughter as a non-Jewess. 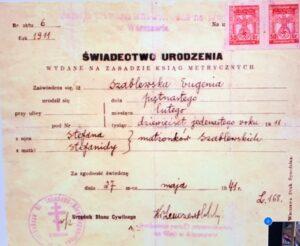 With the help of a local historian, after returning to Poland, Marek found the ruin of a guesthouse run by Carmen Achmarańska, and where his Jewish step-grandmother had worked during the occupation. It was a favourite Nazi watering hole. They demanded to stay the night. She evacuated the guest house, and was accused of being Jewish, which she denied. She was to be taken to Warsaw 15km away but was shot in the head on the way. The locals were instructed to leave her in the ditch as a warning. She had saved so many lives. The ‘Carmencita’ guest house was burned down in the 1950s.

At the end of the occupation in August-October 1944, after the Warsaw Uprising in which Witold took part, there was systematic destruction by the Nazis as the Russians moved in. No more than 1000 people remained in the ruins of the city, left hidden under rubble in cellars when the city was liberated by the Red Army in January of 1945.

During the Uprising, German prisoners were extracted from the cellars of the telephone exchange in Warsaw. According to Marek’s father, women miners dug their way into the building to allow the resistance fighters access, as they were smaller and could gain access more easily. His father was heavily involved in the Uprising which resulted in 250000 deaths. The Nazis plundered much art work and other valuables, scorching the city before the Red Army moved in. It has now been beautifully restored to its original state in the old town.

At the end of the Uprising, Witold was taken prisoner and transferred to Germany as a POW, like his Father in Lamsdorf.  His parents and half-sister were taken to Berlin as slave labourers for the building of Berlin’s Templehof airport. He came to Hardwick Hall after the war and was employed at Gilbow Tools, Bridge Street Sheffield, and then at W.Tyzack Sons and Turner Ltd of Little London Road in Heeley.