Lord Byron was the greatest romantic poet of all time. Born George Byron on 22nd January 1788, he became Lord Byron, the sixth Baron Byron, at the age of ten in 1798 when he inherited the title from his great uncle, William Byron of Newstead Abbey.

He was a complex character who led an unconventional lifestyle, but his writings live on forever and possibly more has been written about Byron than even Jesus Christ.

Byron attended Harrow School and later, from 1805 until 1808, Trinity College Cambridge where developed a love of sport – cricket, boxing, shooting, horse riding and swimming – despite having been born with a club foot.

Boxing was a particular passion. At Trinity dogs were banned as pets but he managed to work round petty rules by having a brown bear. During this time he engaged in many sexual adventures and fell deep 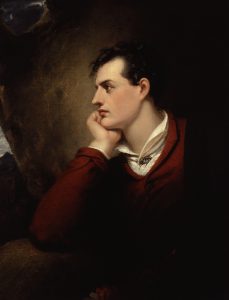 into debt through gambling. After university he embarked on a grand tour through the Mediterranean and the Aegean seas.

Upon turning 21, he took his seat in the House of Lords but only made three speeches, mainly in support of the Luddites who were campaigning against the introduction of machinery which would result in putting people out of work. Byron throughout his life championed the underdog.  His first volume of poetry, ‘Hours of Idleness’ in 1808, was attacked by the literary establishment in Edinburgh but Byron retaliated with the satirical poem ‘English Bards and Scottish Reviewers’ which attacked the elite with wit and satire. This gained him his first literary recognition.

Byron gained a reputation as a womaniser and there were suggestions that he was also bi-sexual which apparently Byron had never admitted. His praise by London society propelled him into a series of love affairs including with no less than Lady Caroline Lamb, wife of the future prime minister Lord Melbourne. She described him as ‘mad, bad and dangerous to know.’

In September 1814, Byron proposed to Annabella Milbanke and they married in January 1815, having a daughter born in the December. However, the marriage was short-lived, finishing in the January amid his drinking, gambling and affairs. The daughter was Ada Lovelace, who worked with Charles Babbage the computer pioneer and she was attributed as being the first computer programmer.

Byron’s life of debauchery and lust continued but he managed to pen his greatest poem ‘Don Juan’ which was a change from the melancholy ‘Childe Harold.’ In 1823 he accepted an invitation to support the fight for Greek independence from the Turks, selling Newstead Abbey and sinking all his savings into the cause. On 15th February 1824 he fell ill and died at the age of 36.

He became a Greek hero and to this day his name and memory are celebrated in parts of Greece. He was mourned in England and buried in the family vault at Hucknall Church, Nottinghamshire. Clearly a remarkable, talented and complex man, his poems and his memory are still revered 200 years on and he is regarded as one of the greatest British poets. He is best known for his brilliant use of the English language and also his promiscuous lifestyle.