Martin Thomas is a retired vascular and thyroid surgeon, keen sailor and a very old friend. He came all the way to Sheffield from where he lives in Bosham, Sussex, especially to deliver this talk. He was a commodore of the Ocean Cruising Club. He has sailed to the Antarctic twice and then seven years ago, with a group of retired surgical colleagues from St Thomas’ Hospital, he sailed across the Southern Ocean from the Falklands to South Georgia and back, tracing the exact route of Sir Ernest Shackleton’s epic “Traverse” in 1916 across the massive, unexplored and uncharted mountains and glaciers from Peggotty Bluff in King Haarkon Bay to the other side of South Georgia at Stromness. There Shackleton knew he could summon help from the Norwegians in the White House at the whaling station to save the other members of his Endurance crew marooned on Elephant Island and at King Haarkon Bay

In the first part of this fantastic, superbly delivered (not one um or ah!) and beautifully illustrated talk with dramatic video clips, Martin gave an account of Shackleton’s exploits comparing them with those of Amundsen and Scott, in order to give a detailed insight into the very different characters of each.

While Roald Amundsen was hugely successful, and the first to reach both Poles, he was so driven and forceful in achieving his ambitions but at the expense of the wellbeing of his men and dogs, slaughtering the latter for food. Scott believed in naval discipline, was irritable and not the best man manager, but his relative failing, in contrast to Amundsen, was his reluctance to use dogs and skis, relying on less efficient manpower to drive the sleds along, and using up 7000 instead of 4000 cals/day. Shackleton (Fig 1), on the other hand, led his men by example, was much less formal, knew how to get the best out of them.

Sir Raymond Priestley in 1956 said of Shackleton “Scott for scientific method, Amundsen for speed and efficiency but when disaster strikes and all hope is gone, get down on your knees and pray for Shackleton”. He became a role model as one who, in extreme circumstances, kept his team together by incredible leadership. One of many examples was Shackleton’s fixing of the lots drawn for the better fur-lined sleeping bags, making sure his men got them instead of himself.

His first expedition was with Scott and Wilson to a record latitude of 82 degrees South in 1901-4, followed by Nimrod in 1907-9 to 88 degrees South  just 97 miles from the South Pole. Amundsen won the race to reach the South Pole in 1911. Shackleton then raised funds for a coast to coast crossing of Antarctica via the South Pole. Disaster struck when Endurance was trapped, drifting for months in the ice flows and eventually crushed in pack ice in the Weddell Sea (Fig 2). Martin showed Hurley’s dramatic video of Endurance disintegrating and sinking. The crew escaped (Fig 3) with provisions, eventually reaching Elephant Island, 346 miles from where Endurance was lost, and where they were marooned. It was the first time in 497 days that they could stand on solid ground but the chances of rescue from here were zero. Shelter was made by upturning two of the three boats and constructing upper and lower floors – the “Snuggery”. They survived on elephant seal, penguin meat and albatross. The chicks were a real delicacy.

Notables amongst the crew were Frank Worsley (captain), Frank Wild (second-in-command), Hussey (meteorologist), McIlroy (head scientist), Tom Crean (head dog handler), McNish (carpenter), Frank Hurley (photographer), Alexander Macklin (one of the two surgeons), Marston the artist and Mrs Chippy, the cat, who was shot (act of compassion as she could not survive the conditions and needed feeding).

The only course of action for survival was to risk a 720 mile open-boat journey to South Georgia. The James Caird (Fig 4) was adapted by Harry McNIsh the carpenter to raise its sides to allow rock ballast for stability, strengthen the keel, seal the joints with a mixture of artist’s oil paint and seal’s blood and to create a deck. Those chosen to make the journey with Shackleton were Frank Worsley (navigator), Tom Crean, two strong ABSs McCarthy and Crean and the carpenter McNish. The latter had been insubordinate and mutinous when stranded on the ice flow (see the excellent 2002 film “Shackleton” with Kenneth Branagh) and it was a stroke of man-management genius on Shackleton’s part to take along McNish, in order to separate him from Vincent, all for the good of those left behind on Elephant Island. McNish was trouble but if he declined to come, Shackleton threatened to shoot him. In any case, McNish’s carpentry would prove indispensable.

They travelled light, with provisions for just four weeks. Success came from Shackleton’s leadership, Worsley’s magnificent navigational skills, much of it by dead reckoning, sextant, nautical almanac (which was almost destroyed, “shedding its pages so fast” from the elements), a  chronometer, only an occasional glimpse of the sun and stars in the extremes of appalling weather and the problem of getting bearings, and the need to be constantly baling out. The ever-optimistic McCarthy was a huge support to Shackleton and the others: “it’s a grand day sir”. They were very cold, inadequately clothed and constantly wet. Thirst and exhaustion was very serious problems, but all overcome by the sheer will to survive. It was endurance to the extreme, through superb seamanship and discipline.

After deferring landfall to avoid the real risk of destruction on the South Georgian rocks in a gale, they backtracked, then entered King Haarkon Sound (Fig 5) the next day but faced a gruelling 51km trek across the mountain range (Fig 6), scaling 9000ft and totally inadequately kitted out. Screws were inserted into their boots (which leaked) to act as makeshift crampons. Shackleton, Worsley and Crean made the journey armed with minimal tackle such as rope, rations, tobacco and primus, to travel “light”. Picking fair weather to set off, there were trial ascents into a series of mountain gaps and forced descents and re-ascents before finally reaching a precipice… and over they went, blindly and roped together, as there was no alternative. “I was never more scared in my life than for the first thirty seconds…the speed was terrific…that hair-raising shoot into the darkness” (Frank Worsley: Shackleton’s Boat Journey. 1940. Hodder & Stoughton – an absolute must-read for Probus). And so to Grytviken and rescue.

They turned up totally filthy and unrecognisable in Stromness (Figs 7 and 8), unwashed and unshaven for months. The Norwegians were very hospitable, offered baths and food, and they returned to pick up the other survivors. Elephant Island was a challenge with four attempts over four months and in four ships before they could be evacuated and repatriated

Martin’s voyage on Pelargic Australis (Fig 9) and traverse of South Georgia in Shackleton’s footsteps was certainly a challenge for men in their 60s. There was fitness training and crevasse management in the Alps. Mountaineering and skiing experience was vital. They were all old like-minded medical friends who got on together and they had to be in peak condition. There was also the risk factor: no emergency facilities in South Georgia! Evidence of life lost in more recent times was seen with a helicopter wreck en route from an attempted SAS rescue during the Falklands War. Martin fell 600ft and, as he put it, “a very silly thing to do”, thankfully with only minor scrapes. But, at worst, they risked not surviving. Extremely unpredictable severe weather (Fig 10), which changes quickly, makes for a very hostile environment. But what a holiday! 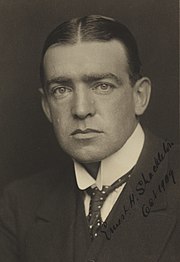 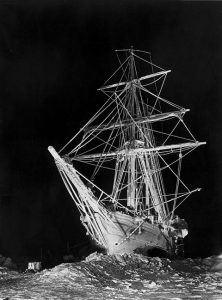 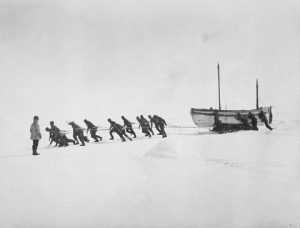 Fig 3. Across the ice flows after Endurance sank 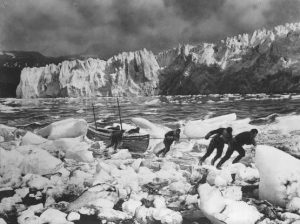 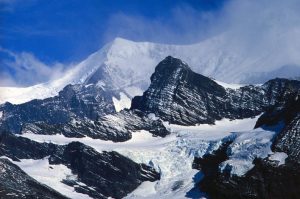 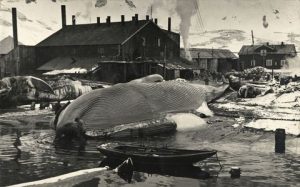 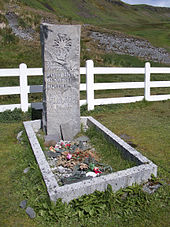 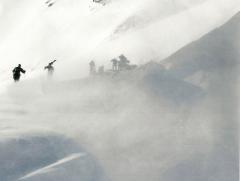