Tim is a project co-ordinator with the “Peak into the Past“ local history organisation and gave an interesting talk on a rather unusual topic. Normally, you would expect a talk on the history of the Peak District to be concerned with mining, canals, mills and archaeology, but this was about the life and crimes of an elderly woman who was an habitual criminal within the Derbyshire and Nottinghamshire area.

The woman was Annie Burke, also known as Annie Monks, but she had many other aliases and was described variously as a hawker, beggar, itinerant and vagrant. Details of her life are shrouded in mystery because she had numerous aliases. She led a nomadic life and was an accomplished liar able to spin the most heart-breaking yarns for sympathy. She was born in Oldham in 1843. Or was it Hunslet, Leeds, in 1851? Or 1853? Prison records were hazy to say the least. What made her stand out in the criminal fraternity of the time was that she was female and elderly, which was not the norm.

She was married in 1879 to a George Monks and they had eight children, four of whom died probably when young. They lived in slum dwellings in the Narrow Marsh area of Nottingham, which was dangerous and rife with disease. The marriage was not happy with both husband and wife appearing in court on various assault charges against each other. The children were taken into care. Perhaps, this is when Annie became a vagrant, living by her wits in a chaotic lifestyle. 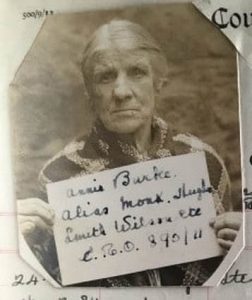 Her pattern of criminal activity was mainly to call on large country houses and vicarages and spin the story of her pitiful plight which invariably involved the fate of her husband, children or any other relative which could pull the heart strings. Good natured householders or servants would give her clothes, food and money but she would take the opportunity to scan the house and grounds and steal anything of worth. In modern criminal parlance she often distracted the victims to select the loot. Also, she would ask for the loan of clothing for a special occasion like a funeral or christening, but the clothes were never returned. Invariably, she would sell the stolen goods in public houses for money which was spent on food or drink .

Clearly, Annie liked her drink which would result in many convictions for brawling and assault. Her defence in court was often “I was very drunk and don’t remember anything.” Her stealing and lies invariably resulted in convictions with hard labour in prison. It was noticeable that many of the convictions were for the theft of small items like a carpet, a basket of clothes, a bottle of beer and table clothes. Compare that with sentencing today! At one court appearance she explained to the judge that she had 65 convictions and was going for the century. She led a chaotic life and one wonders if her regular spells in prison gave her some form of structure with shelter, food and discipline despite the prospect of hard labour.

Tim was asked why he chose to study the life and crimes of Annie Burke (Monks) and replied that when researching prison records he was amazed at the shear number of convictions she had amassed and was intrigued to know more about her. He came to have a sneaking regard for her and, although she was a criminal with many victims, she was feisty, hardy and resourceful. She was a survivor, although there seems to be no record of her whereabouts after 1915, or of her death. Certainly, Annie Burke led a sad, chaotic life and she would never have imagined that her life would have been researched and presented to the gentle folk of Stumperlowe Probus Club in 2019.