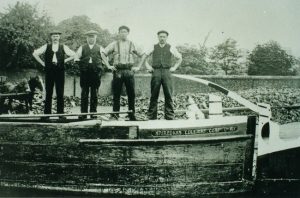 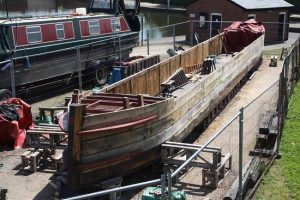 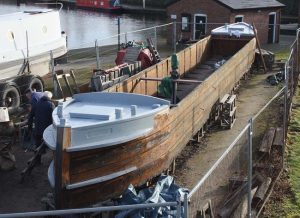 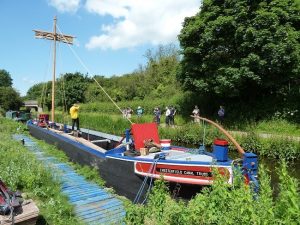 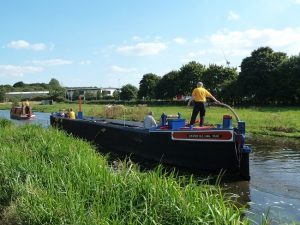 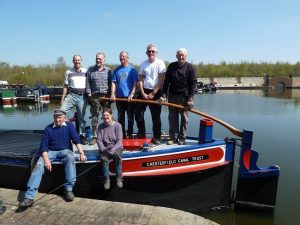 particularly for the re-opening of closed sections between Kiveton Park and Staveley.

navigation canals. These boats often referred to as Cuckoo boats remained unchanged throughout

the life of the canal which stayed open until 1940’s when it was eventually abandoned.

John then gave an interesting insight into the nature of the boats themselves, and the work

carry some 24 tons of freight pulled by a single horse , the equivalent 24 wagons or 240 pack

horses. The boats had no sophisticated facilities only a basic cabin which offered little or no

protection to the crew. The last known example of these boats was unfortunately broken up  in

Cuckoo boat, unique to the Chesterfield Canal, since the 1930’s this becoming The New Dawn

Project. A retired boat builder David Bownes was persuaded to join the group and it is his

until launch in 2015. A model of the boat was built to raise awareness of the project and assist

with fund raising and detailed plans were prepared though John told us the these were not    consulted on many occasions the build being completed “by eye” in the main.

for 3 years, much to his wife’s displeasure. A build site was located in Shireoaks in 2010

when the 4+ year build programme commenced. Ninety planks for the bottom of the boat

long 10” deep and 2” thick. Prior to fixing the planks had to be steamed for 4 hours and then

involved the use of foul smelling material including horse poo, horse hair and tar, the interior

of the boat also having an additional layer of protection using treated flannelette sheets.

The boat was now ready for fitting out fixing the rudder, side boards, mast and tiller all of which

were cut by hand from seasoned timber.

On completion a celebratory launch took place and the boat is now in use for displays, sponsored

Cuckoo boat looked like on the water in the 18th and 19th centuries.

The trust are now hoping to raise £200,000 to complete their works which I am sure they will

having head of the huge efforts on the New Dawn Project by the volunteers.