Peter attempted to summarise 900 years of legal history in just over an hour , covering the quirks and wisdom of English law. –no mean challenge  .  Today, we have trial by jury , no death sentence and our jails are full including over 300 inmates on life sentences alone.  No longer are  the guilty flogged, hung, immersed in boiling oil or burnt at the stake.  Clearly, justice and the penalties for crime have moved on a great deal since the medieval ages although many offences are very similar.

Before Trial by Jury, we had the pleasantries of Trial by Water, Trial by Fire and Trial by Battle. 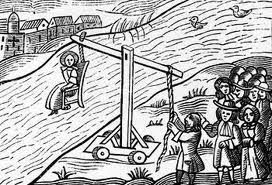 Trial by Water would see the accused  immersed in a pond if they survived they were guilty, if they didn’t they were not guilty !!!    Trial by Fire consisted of putting a piece of red hot iron into the clench fist of the accused , whilst Trial by Battle was settled in a 60 foot square where the accuser and the accused would fight to the last man standing to settle the verdict. All very primitive stuff.  Trial by Battle is hardly a modern way of settling legal matters but this didn’t stop an aggrieved motorist who had received a fixed penalty notice from asking the DVLA for the name of their champion to resolve the dispute.  Needless to say the DVLA did not respond and the motorist was still fined.

Up to, and including the 12th century, the powerful clergy were involved in administering the law, but they were often corrupt and in 1215 they were forbidden from involvement in legal matters.   The concept of Trial by Jury was established in the 14th century and is now enshrined in our laws.  Peter emphasised the point that once a jury has given its verdict this must not be changed.  He went on to illustrate this point by giving us examples of some high profile cases where the juries decisions were unexpected. In 1380 a law was passed making it illegal to contact jurors during the trial.  Trial by Jury may have its critics but is largely favoured by ex- jury members as the  best way of administering justice.

The death penalty has caused a great deal of discussion and controversy with many in favour and many against , quoting miscarriages of justice.  In the 50’s and 60’s moves were made towards abolishing the death penalty.  In 1957, the Homicide Act was passed which removed the death sentence for domestic murders leaving the sentence for the murder of policemen . In 1969, the death sentence was abolished for all murders.

Peter gave us a most interesting and polished presentation as he raced through 900 years of legal history, prompting a whole host of questions from a very attentive audience.