The words, ‘The Silk Road’ somehow conjured up images in my mind of Marco Polo’s travels to Cathay, travelling across the Himalayas on elephants. Nothing could be further from the truth as Doctor George Clark explained.  He is an expert on the subject and has travelled part of the route, going from West to East, from Issykul Lake to Tash Rabat.

The route was started in about 220 BC by the Han Dynasty and is some 4000 miles long, stretching from China to the Mediterranean. Whilst silk was a very lucrative product from China, other goods were traded along the route as well, namely jade, coloured glass, horses,  roses, rhubarb, peas, peaches, oranges, camellias, paper, and religion to mention just a few. It was very important because it was the only route from China to the Mediterranean and Europe.

The route was not a single trail but consisted of several tracks as shown in the accompanying map and took the traveller through very extreme conditions. At times the routes went through hot, unforgiving desserts and at others over very high mountains where travellers could quite easily freeze to death. Only missionaries travelled the whole route, normal traders would only cover a few hundred miles, buying and selling goods at various caravan serai 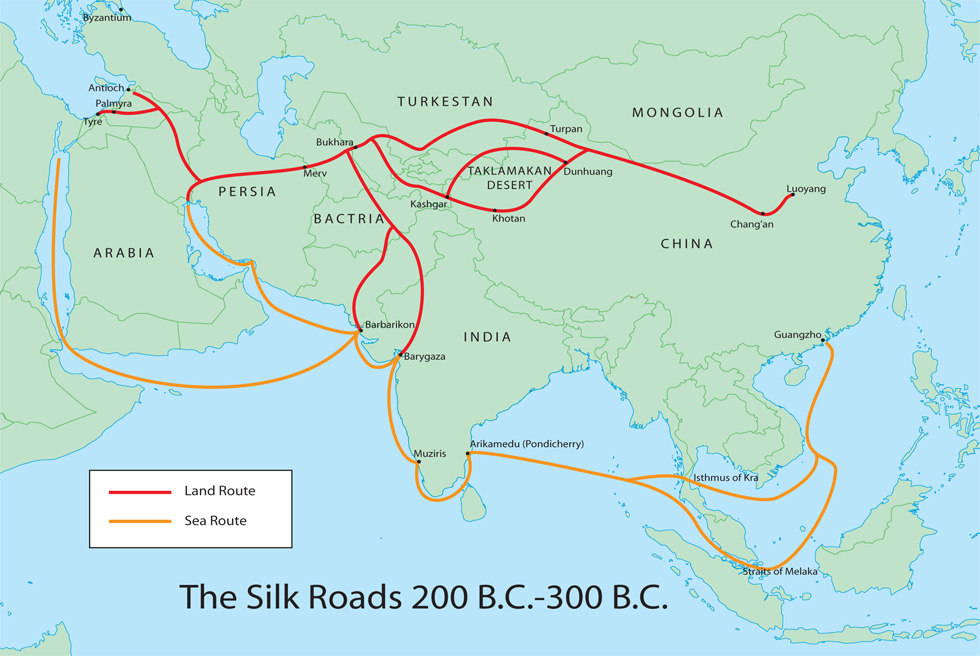 There was always the danger of being attacked by bandits on the road, so traders used to travel in groups, or caravans and at various point along the routes there would be ‘Caravan Serais’, which were safe places  for resting and feeding.

Temujin, who became Genghis Khan and  founded the Mongol Empire by uniting the nomadic tribes of North East Asia,  conquered most of central Asia and China, making it the largest empire in history. He realised the value of the silk road and stationed soldiers regularly along the route to keep it safe.

In 751 AD the Muslims defeated the Chinese at the battle of Talas and brought back the secrets of paper and silk making to the Middle East, which spread from there  to Europe. In 1514 the Portuguese reached China by sea and a new sea route was opened causing the ‘Silk Road’ to decline. Many of the caravan serai became buried in sand and hidden; only to be rediscovered by 19th century European Explorers who plundered the artefacts from the route.

Many of the treasures can now be found in the British Museum and other well-known western museums. Needless to say China is keen to reclaim them.

It was another riveting talk by Doctor George Clark and we will be keen to invite him again.