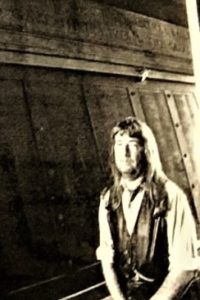 Stephen Gay by  Sheffield’s Great Central Railway war memorial is a series of panels within a wooden frame – upon the panels are the names of those who fell in World War I. It is on display outside the Crowne Plaza Victoria Hotel – the original hotel to the Victoria Station.

This wonderful talk about east of Woodhead Tunnel, was the second in a series of three (see John Abel’s blog 15th February 2019) and was liberally illustrated with traditional slides, stuffed with anecdotes from the folk he’s met walking along the line over the years, some of it now forming part of the Trans Pennine Trail. The Woodhead route of the Manchester, Sheffield and Lincolnshire Railway linked Sheffield Victoria and Manchester London Road Stations and was open between 1845-1981.

Townhead, Dunford Bridge There are four rows of railway cottages now filled with ex-Oxbridge veteran eco-warriors, including Swampy (AKA Daniel Hooper and well worth a read in Wikipedia). Stephen met Ashley Jackson, the famous Yorkshire artist, there on a walk and after chatting him up, thought he might be in for a cheap painting of the cottages. “How much?” “£13000” “I’ll take postcard!”

The electric locomotive 26020, designed for use on the Woodhead Line finally electrified in 1954 is the only engine left of its type and rests at the railway museum in York. 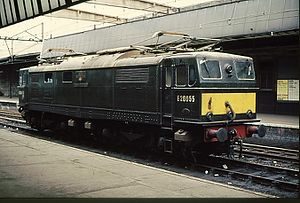 There were problems due to lack of space during line electrification. Arches were blown up and replaced with a concrete gantry. But Woodhead remains with EUR loading gauge so and might one day accommodate Eurostar. 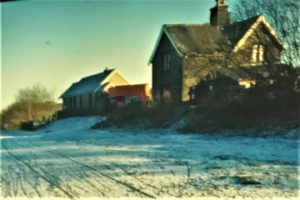 Hazelhead Station closed in 1950 from lack of use. The waiting room on the Manchester side remains as a house. The owners have made a bob or two from cold drinks in the summer and with an eye for the main chance, hot drinks in winter. It got a Best Station award in 1949, which is a serious business and anything but friendly rivalry. The post box just outside and seen on the telegraph pole on the A616 had Hazelhead Station on it, even 50 years after closure.

Barnsley Council got a grant to demolish the arched bridge at the station, only realising afterwards that the A616 would be opened up as a “race track”, just where there’s a nasty dip in the road. 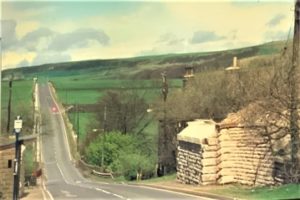 Signal box at Bullhouse Colliery There were rail crashes on the line in Victorian times partly due to the steep gradient whose summit lies within the eastern end of the Woodhead tunnel. There were four fatal train crashes in 15 years. The first one killed a cow.

The worst fatal disaster was the Bullhouse rail crash in 1884 which involved a derailed coach derailed by the buckled line and pulling the other gas-lit coaches 16 feet down an embankment into a road (double page spread in the London Illustrated News).

Shawhall Lane Crossing: The original railway lines can still be seen at the crossing. 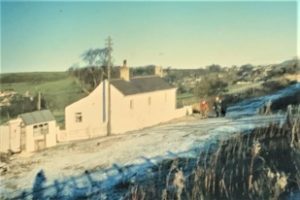 Richard Branson and Virgin trains are weighing up whether to reopen Woodhead which would be very bad news indeed for the crossing keeper’s cottage. Health and safety would inevitably lead to demolition because an express running inches from your bedroom carries issues. Incidentally this photo at the crossing keepers cottage was Stephen’s only known selfie (shadow bottom left).

Thurlestone Signal Box This is where the Trans Pennine trail splits to York Chesterfield and Leeds.

Penistone The goods shed and office date from 1845. Coal drops are still there (wooden bodied wagons dropped coal down from the arches). The stone work is grade 2 listed and the plan is for restoration with facsimile wagons above. It’s in a a poor state of repair at present however. Bring back the birch? 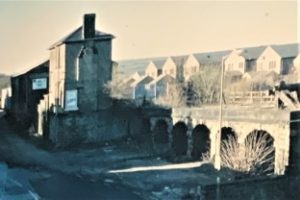 The owner of one of the new houses seen behind the coal drop was unaware of the historic railway (he did know however about the Trail, thank goodness. He remains blissfully unaware however that Richard Branson still has eyes on the place.

Penistone Station used to be very busy with 7 platforms and 100 employees in its heyday. The Trans Pennine Trail lies behind the station where there are now small businesses. 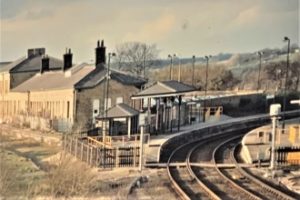 Thunder, Stephen’s German shepherd, found a sink hole where an unspoilt old station subway went, sealed up since Jan 1970 with wooden handrail and green glazed tile work. A local came by as Stephen was coming out of the hole. Only Barnsley could quip “Thars missed last train then?”

Penistone single line. The signal box is high where the double goes into a single track but was destroyed by vandals. Originally there were 100 levers reduced to 6 by the time it closed. Camel Laird steel works was nearby. A railway tunnel ran under the steelworks, the main line and sidings. It’s obscured by housing and an industrial estate now, amazingly called “The Sidings”. This area used to be Huddersfield Junction, but was renamed Penistone. Occasionally there are trains. Interesting Victorian iron work can be found. 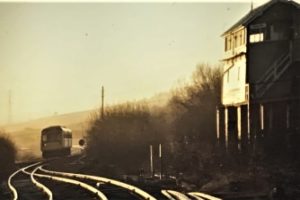 Rail workers were buried at Penistone, including a station porter who fell off the platform with his barrow and killed by an express. 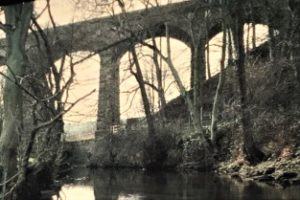 A stone block once hit a navvy below – one William Crawshaw. His stone- carved epitaph, discovered in the 1980s, was then embedded within the bridge stonework. A cherry picker checks it and the rest of the viaduct from time to time. There’s a sign about it on top of the viaduct for walkers. 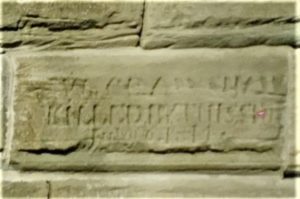 Thurgoland Tunnel Electrification for twin tracks was impossible so a new tunnel was built for the down line. A retired rail worker used to check the tunnel each morning (alone!); “when I heard rails singin’, get thee-sen intut recess… were I glad to get t’ t’other end so I could get ta light me woodbine”. It was 370 yards long, built by LNER in 1947 and finished off by BR in 1948 and is almost unique in being built by two companies. 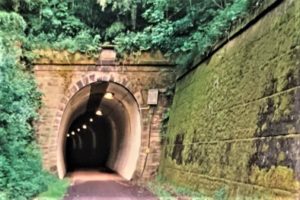 Wortley Station disappeared in 1955. The Earl of Wharncliffe had own private waiting room. Stocksbridge bypass was built in the 1980s disturbing a burial ground so it’s haunted around there. The line to the steelworks survives, passing Wharnecliffe Crags. The old signal box at Stocksbridge became a maintenance office but vandals wrecked it. Deepcar platform is still there. 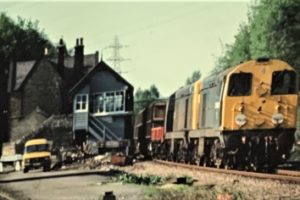 Oughty Bridge station (correct spelling) is now a grade 2 listed gritstone house but without its platform coping stones. Stephen originally witnessed white van men trying to steal them. They scattered down the track unaware a 60mph train was about to meet them. The stones disappeared permanently later on. What about the poor old train driver? They do react differently after fatality. Some carry on working, others can’t cope. 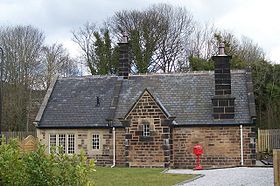 Wadsley Bridge Station saw the last football special in 1984 when Notts Forest were playing Sheffield Wednesday, which was a great way to end a great talk 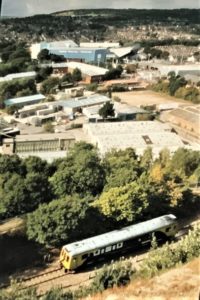 As a post script, if I’ve got this right, Stephen met a Wheel Tapper, who’d been doing it for 30 years but had no idea why he was doing it. How did he manage only being able to tap one side with the train in the station? Simple! Wait for it to come back then do the other side.

(The embedded links are courtesy of Wikipedia)