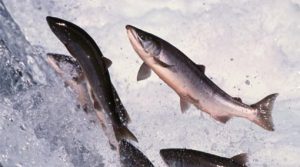 Chris Firth was born in Doncaster close to the banks of the River Don and early in life developed a passionate interest in the river.  In 1975 he took up a post as a Fisheries Bailiff working in the Lake District. In 1977 he moved to Beverley where he began work with the Yorkshire Water Authority as a Fisheries Inspector.  In 1983 he was promoted to Fisheries Officer based at Doncaster and, amongst his other duties, began work on the rehabilitation of the River Don and its fishery. In 1999, following dramatic improvements in the environment and ecology of the Don system, the Environment Agency published his book ‘Doomsday to the Dawn of the New Millennium’ an account of the demise and recovery of the fish populations of the river. In 2000 he was awarded an MBE for services to Fisheries and the Environment.

In the sixteenth and seventeenth centuries there was so much salmon in the River Don that only poorest people ate salmon.  An indication of this is that there were more otters along the river than anywhere else in the north of England.  During the industrial revolution, it became one of the most polluted rivers in England, but its decline started much earlier.  To provide water power, low weirs were constructed across the river and these interfered with salmon movement.

In 1626 the Dutchman Cornelius Vermuyden started the draining of Hatfield Chase to the west of Doncaster.  The work involved the re-routing of the Rivers Don, Idle and Torne, and the construction of drainage channels. It was not wholly successful, but changed the whole nature of a wide swathe of land including the Isle of Axholme and caused legal disputes for the rest of the century.

In 1732 a Parliamentary Act made the River Don a navigation.  This encouraged industrial development and bigger weirs were constructed that could not be traversed by salmon.  By 1790 there were no salmon reaching the river’s head waters.  By 1884 largely due to the surge of people to work in the new factories, the river was grossly polluted and remained so for the next 120 years.

In 1975 Yorkshire Water took over the river but was mostly concerned with clean water supply.  In 1989 the organisation was split into Yorkshire Water plc and the National Rivers Authority.  The latter was very concerned with improving the River Don and began stocking the river with fish to act as indicators of pollution and was more active in prosecuting polluters.  Work also began on constructing fish passes along the river system to permit salmon to reach further upstream.  £3m has been raised over 10 years for this work and last winter for the first time in centuries, salmon were caught near Meadow Hall.  Funding has been allocated for a fish pass for Masborough Weir in Rotherham and upon completion of this project, all obstructions for salmon below Sheffield will have been addressed.  It is hoped and expected that the River Don will again support a sizable population of salmon in the near future.