Peter Styring became Prof. of Chemical Engineering and Chemistry at the University of Sheffield in 2007.  He graduated at Sheffield then worked at Hull and New York State universities.  He is an expert in Carbon Capture & Utilisation (CCU).  He is the author of “Carbon Capture and Utilisation in the Green Economy” and is Chair of the CO2Chem Network.

His talk began with providing evidence that it is CO2 that is the major contributor to global warming by showing a series of “hockey stick” graphs showing the global effects of various suspected contributors.  Deforestation has nothing like the effect that it is commonly thought have and simply planting more trees will not in itself solve the problem. Similarly, the Ozone layer has only a small effect and aerosols have a negligible effect.

He then moved on to how CO2 is a “greenhouse gas” and a climate change accelerator.  A problem is that fossil fuels take millions of years to create and seconds to destroy.  He is convinced that the generation of fossil fuel use for our electricity, heating, industrial production and transport is detrimental.  To mitigate against this requires: Government policy; life cycle awareness & sustainability; creation of new chemicals, processes and industries. 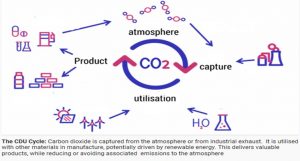 The top of the pyramid is to use no new fossil fuels and the lowest level is to bury the problem.

At the IPCC conference in Korea we received a dire warning “to reduce the rate of global warming to a maximum of 1.5 0C per annum and we have only 10 years to save the planet”.

Peter is convinced that legislation alone is not the answer and solutions that create a “profit” are a practical approach.  Taking inspiration from Sir Fraser Stoddard, he believes in using CO2 to make things.  Peter Medawar speaks of “something to be clever about” to create a world where there is no surplus CO2.  Peter covered many aspects of CO2 utilisation and in particular, various forms of transport.  He thinks there is a big future for the mass production of Dimethyl Ether.  This liquid is a substitute for diesel and is already used for some goods vehicles in Canada and the US.  For a small cost, diesel engines can be converted to use DME with no emission pollutants.  This is a much better method of capturing CO2 and probably much less costly than storing it under the North Sea.

This was a spell binding talk given by an international expert that cuts through some of the mis-information that is around today.