Most of us – aside from one – had never heard of Smith Clarke but all of us had heard of Alvis and their wonderful cars. Smith Clarke was a naturally clever engineer and he joined the Alvis company from Daimler where he remained until his retirement. During his time at Alvis ,his wife became ill and this led him to engage his engineering skills to develop and manufacture anaesthetic equipment and to develop iron lungs much used at the outbreak of the polio epidemic of the early 50’s.

Adrian not only has an Alvis car but remembers equipment developed by Smith Clarke which he used in his career as an anaesthetist. 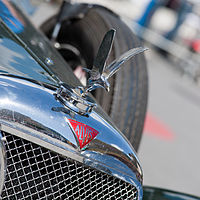