Peter Stubbs is a retired solicitor who has developed an interest in naval history, he has given 2 talks previously to the Club.  The history of the British Navy during WW1 is a big subject and his talk is in two parts and this report refers to the first section.

Until the 16th century warships had been essentially for transporting soldiers for hand to hand fighting. Now wooden ships with gun ports and muzzle loaded guns on 3 decks were built and 250 years later in the time of HMS Victory, warships had changed little.  95 years later HMS Warrior was launched with iron cladding to a timber frame with steam engines but still with 3 masts and muzzle loaded guns.  The British Navy was complacent and set in its ways.  In 1900 it was like a rich old man, swollen with self-confidence with memories of past glories and little regard for modern trends.  There was much emphasis on smartness and little on training.

In 1889 the German Chancellor Bismark stated “I see England as an old and traditional ally.  No difference exists between England and Germany”.  In England, France was the traditional enemy.  The Kaiser was very jealous of Britain’s dominance of the seas and in 1897 he made Tirpitz Secretary of State of the Imperial Navy.  He was a brilliant administrator and began to increase the German Navy by 38 battleships, 20 armoured cruisers and 38 light cruisers.  The British Navy at this time had over 900 ships.

In 1904 Admiral John Fisher became 1st Sea Lord.  He recognised the threat the new German naval policy represented and thought that war was inevitable.  He removed 150 obsolete ships from the fleet and planned for modern replacements.  He championed the development of the submarine and invented the concept of the modern destroyer.  He was the originator of the Dreadnought battleship.  No other ship could compete with her and Britain built 35 of them.  Seeing the Dreadnought, Germany halted construction of its ships and ordered new designs to be built.  The Battleship Race was on. 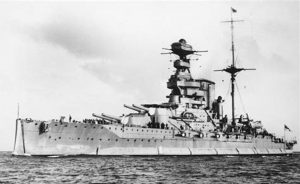 The British Navy went to war on 4th August 1914 with 609 fighting ships including 29 Dreadnoughts and battle cruisers to Germany’s 17 equivalents.  It soon became clear that sea power must now contend with mines, torpedoes and submarines.

At this time 60% of our food and other commodities were imported.  The objective of the German Grand Fleet was to break out from the North Sea and to attack Britain’s merchant shipping.  The Grand Fleet under Admiral Jellicoe was stationed at Scapa Flow to prevent this.  Britain’s blockade covered the whole of the western approaches and applied to all ships bound for Germany.  This had an ever more damaging effect on German production and living standards.

At this early stage in the war inter-ship communication was poor.  In the battle of Heligoland Bight it was reported “Our battle cruisers were scattered by and made violent attempts to sink a squadron of our own submarines.  Our light cruisers sent in to support were in two cases thought to be enemy ships by our destroyers and in another case two light cruisers chased two torpedo boats each supposing the other to be the enemy.”  Despite all this Commodore Tyrett won the battle and this had a significant effect on future German policy that became more cautious.

Peter’s talk covered several naval battles in the southern hemisphere including the Battle of Port Stanley and the sinking of the Scharnhorst and the Gneisanau.  The second part of the talk will be more focused on war in the northern hemisphere.

We eagerly await Peter’s concluding talk in what is an intriguing insight into our recent history that few of us have much knowledge of.